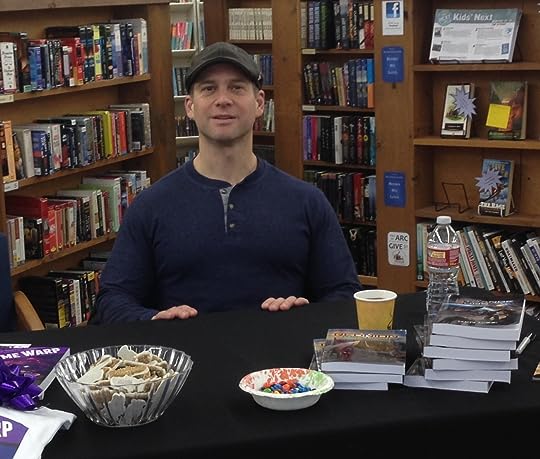 I intend to write today about Fritz Leiber. But first, I want to acknowledge Jan’s Paperbacks for once again arranging a book signing for me. My hat is off to you ladies.

What more can be written about Fritz Leiber? He was one of the giants of swords and sorcery. Among the genre’s congnoscenti, he is recognized as a peer of Robert E. Howard. Of course, to the casual reader he’s less likely to be a household name. For those of you who have played Dungeons and Dragons, Leiber has influenced you whether you’ve heard of him or not.

Out of all the the writers seated at the round table of Appendix N, Fritz Leiber arguably had the greatest influence on the tone and composition of Dungeons and Dragons. Jack Vance is perhaps the facile choice, the source of the game’s Vancian magic system. But with the creation of Fafhrd and the Gray Mouser, Fritz Leiber drew up the blueprint for swords and sorcery adventure gaming. Any time you and a few friends loot a dungeon then blow the money in a tavern, you are paying homage to the exploits of the big, redheaded barbarian, Fafhrd, and the nimble, dangerous rogue, the Gray Mouser.

Adventure hook found in a tavern? Check. Thieve’s guild? Check. Hell, the Gray Mouser is the prototype of the thief class. Go on, read through a few of the short stories. The influences are both scattered on the surface and running deep through the structure of the narrative and world building.

Beyond that, there is the language. Leiber belongs on the stylistic family tree with Clark Ashton Smith and Jack Vance. There is the rich vocabulary, the sophisticated humor, the cynical philosophy, the witty dialogue. Eminently re-readable.

Do yourself a favor. If you haven’t read the Fafhrd and the Gray Mouser stories, get thee to a bookstore and pick them up. If you have, grab your copies of the shelf and plunge back into the streets of Lankhmar once again.