The Little and the Big 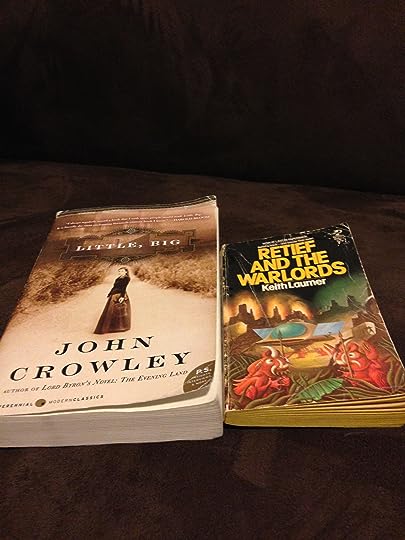 I’ve, at last, worked my way through a couple of massive, minor classics: Little, Big (John Crowley); and Stand on Zanzibar (John Brunner.) “Worked my way through” suggests the process was a chore rather than entertainment. I don’t think that’s entirely accurate, though it might be fair to say that I appreciated both works more than actually enjoyed them.

Little, Big is a remarkable work. In scope and lyrical voice it is an admirable achievement. I’m glad I read it. It elevates the fairy tale to unprecedented literary heights. Stand on Zanzibar is a seminal piece of science-fiction, the acme of population bomb-era alarmism. Its style is experimental, avant-garde, and skillfully executed. I’m glad I read it as well. Much of it is dated, much of the prognostication dead wrong, some of the philosophy — in my opinion — wrong headed. Yet certain keen-eyed observations and intelligent forecasts remain.

I also found both a trifle uneventful and tedious.

While I read these two heavy-weights, I also read The Dragon Masters (Jack Vance), Retief and the Warlords(Keith Laumer), Hrolf Kraki’s Saga (Poul Anderson), and re-read The Moon is a Harsh Mistress (Robert Heinlein) and Lord of Light (Roger Zelazny.) And had a marvelous time doing so.

What do these books have in common that the other two don’t? A couple items. One, brevity. Both Dragon Masters and Retief and the Warlords weigh in at under 200 pages each. Second, action. On a scale of events per page, these four easily top the slower paced works.

This doesn’t make them better books. But it made them better books for me at this moment. It is, I believe, a situational issue. The thing is, my life doesn’t afford me the leisure of uninterrupted blocks of three or four hours straight to sit down and read. What with a full time career, a family, and books of my own to write, I have to read in snatches. I have my lunch book, my putting-the-HA-to-bed book, my workout book, the sitting-on-the-john book, etc. From my experience, a book in which the events are condensed within a low page count work better for a someone who can only spare moments snatched here and there to read. A novel with multiple storylines and dozens characters is more problematic when you can only give it ten minutes or so per day. Too much time is required to recall what is going on, who is doing what to whom, rather than leaping directly back into the narrative.

At least, that’s how I see it.