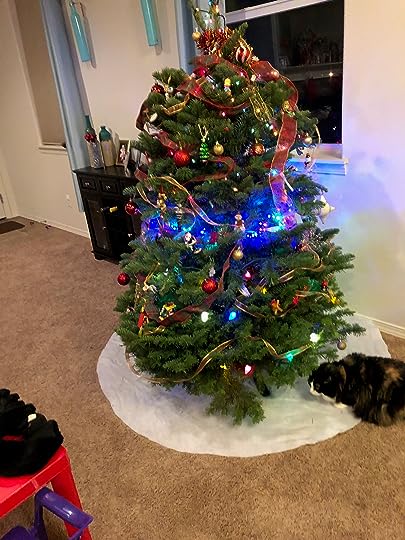 December again. How did that happen? If seems like I’ve only just finished washing up the Thanksgiving dishes. And now I’m neck-deep in stringing lights along the rain-gutters, hanging ornaments on a tree, and vacuuming up glittering refuse from homemade Christmas card creation.

Thanksgiving is — as the name ought to clue one in — about gratitude. New Year’s Eve is about reflection. Christmas? Setting aside the religious aspect — which is what I do, placing it far over there where I’m less likely to stumble over it — what is Christmas about? It isn’t about presents, at least not receiving them: a family man in his late forties does not anticipate a pile of gifts with his name on them waiting under the tree. Giving them, well sure. For the younger recipients — in my case the HA — Christmas is all about the presents.

Is it about family? Maybe. But what about those without much in the way of family, or far from family? I recall Christmas in Haiti. My tent mate and I set up a miniature tree atop our battlebox, added the presents we’d received, and managed to make a bit of a production out of it. And the Christmas dinner was excellent. (I’ll bend your ear sometime about the cruise ship chefs that KBR hired to feed the camp in Gonaïves.) No family joined either of us there, of course. Yet we enjoyed Christmas, attending to such of the rituals as we could.

In case I don’t get around to it later, Merry Christmas everyone.