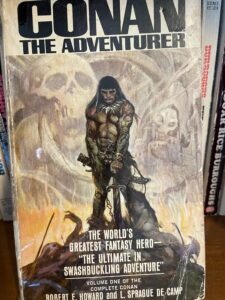 Swords and Sorcery fiction provides us with exciting action in memorable settings. It also drops terrific characters into those settings and lets them run free. Some of those characters have stood the test of time. I’ve selected ten of those that I consider the pantheon of the genre. There is no science here. It is arbitrary and personal. Feel free to disagree. There is no way to be wrong in these exercises.

So, in no particular order (except, perhaps for number one) I present my selection for the Top Ten Greatest S&S Characters. Cue fanfare.

Leading off, to no one’s surprise, is Conan, REH’s quintessential barbarian hero. He sets the bar, and it is a doozy. To some extent it is unfortunate that Conan established a template, because Howard wrote a much more interesting character than a blundering, hot-headed, sword-swinging barbarian. Conan is curious, mercurial, intelligent, driven, and possessed of a wicked sense of humor.

In that last respect, Conan stands in contrast with number two: Solomon Kane. To reiterate, this isn’t a ranking. But since REH wrote both characters, it seemed most appropriate to place the adjacent to each other. Where Conan is riotous, boisterous, and ready to enjoy what the world has to offer, Solomon Kane is dour, reserved, and, ahem, puritanical. He is single-minded, with a self-imposed mission of ridding the world of evil. This monomania allows REH to focus on a primary aspect of the character, showing that there can be complexity even in a character with a narrow range of motivation. 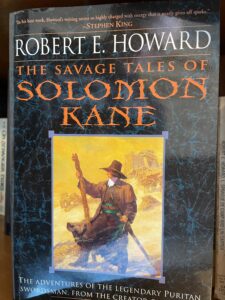 Let’s move from Solomon Kane to Kane. Now that’s a leap. Where Solomon Kane is driven to do the right thing no matter the cost, Edward Wagner’s Kane is amoral to the last degree. He will do whatever it takes to serve his own interest, no matter the cost to anyone else. Kane is as brave as any other character on this list; self-interested does not necessarily equate to cowardice. He’s built in the mold of Conan rather than Solomon Kane, perhaps even bigger than Conan. And as a near immortal he’s had centuries to hone his skills in battle. He’s an assassin, a scholar, and a sorcerer. Kane is a larger than life character who trails havoc in his wake. 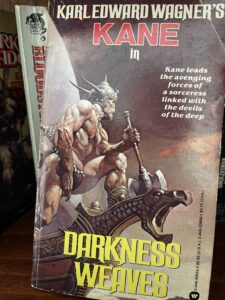 Even bigger than Kane — taller at least — is Fafhrd. Fritz Leiber’s creation possesses a touch of Kane’s amorality tempered with some of Conan’s barbaric chivalry. Fafhrd has an artistic streak. He’s something of a bard. He’s also prone to enthusiasms and compulsions. He’ll follow a trail — a legend concerning treasure, a woman — long after it has clearly grown treacherous and fool hardy. He’ll throw himself into religion. Or scale a mountain or sail across an ocean merely for the challenge. Like Conan he’s a thief and a carouser. Unlike Conan, he’s more inclined to make attachments. For example…

The Gray Mouser. I suppose I could have listed both Fafhrd and the Gray Mouser as a single entry. They are, after all, the Twain. That way I could have given myself an eleventh pick. But they are two entirely different characters and sometimes are at odds. Mouser is diminutive, his fighting style dependent upon speed and agility rather than strength. He’s a thief and a dabbler in magic. Both of which get him in trouble from time to time. He’s more curious than Fafhrd, though sometimes — not always — more wary, and willing to regroup when circumstances indicate. It seems the Twain take turns bailing each other out of the consequences of their enthusiasms. 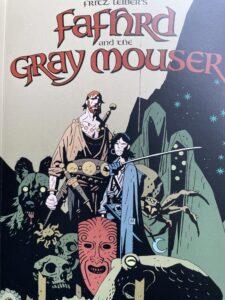 Speaking of thieves, I’d be remiss not to include the inimitable Cugel the Clever, Jack Vance’s rogue. He too dabbles in magic. His attempts to acquire magical artifacts lead him into all manner of messes. His cleverness and ruthlessness see him free. Only to find he’s been too clever by half, getting himself into yet another mess. Cugel is distinctive. His actions can be as repellent as Kane’s one moment then as amusing as Fafhrd’s or the Gray Mouser’s the next. I half considered Hanse Shadowspawn when pondering S&S thieves. But Cugel is iconic, whereas I sold all of my Thieves’ World novels years back after a re-read of the entire series (an exercise in diminishing returns.)

As seems to be a commonality with most of these characters, Michael Moorcock’s Elric is multitalented. Not only is he a gifted warrior — at least when his weaknesses are compensated for by drugs or the vampiric aid of the sword, Stormbringer — he is also a sorcerer of note, able to call on the aid of elementals or his patron, the demon Arioch. Now, I must confess that Elric doesn’t resonate with the Ken Lizzi of, let’s say mature years, as he did with teenage Ken Lizzi. I find the frequent sturm and angst, the navel-gazing and pessimism somewhat off putting. Of the Eternal Champions, my preference is Corum. But I can’t deny Elric’s position in the pantheon. 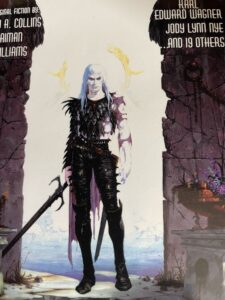 Perhaps to compensate for including an obvious choice, next up is Vlad Taltos. Like Kane he is an assassin. He’s also a witch. Like Gray Mouser he relies on speed and finesses to fight. Though not because he is necessarily smaller than other men. Vlad Taltos is a human living in a city dominated by — let’s just call them elves. Much taller than men and very long-lived. It is a world in which sorcery is commonplace. Vlad has a chip on his shoulder. He’s constantly walking against the wind, always the smallest man in the room, overlooked or outright scorned.. He’s a sarcastic wise ass in a world in which his mouth can constantly get him into trouble.  Yet he’s not without resources. At least in the first few books of the series he’s the head of the local crime syndicate. And he is lucky in his friends. “S&S, Ken?” you ask. I think so. At least most of the books. 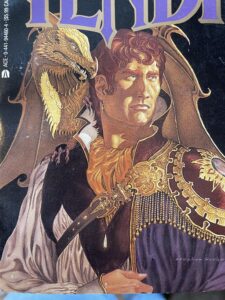 So far this list has served up warriors, thieves, and sorcerers. And, I suppose, one bard. How about another bard? I considered Poul Anderson’s Cappen Varra. A defensible choice, I think, but I don’t know if quantity of material entirely justified it. So, I give you Keith Taylor’s Felimid mac Fal. He’s an Irish bard in a fantastic version of Dark Ages Europe. He survives his travels and escapades through his wits, his bardic magic, and his skill with his magic sword. The full package, really. He’s often reticent about battle. He’s not driven by avarice, nor an overdeveloped sense of justice. He makes for an interesting, well-rounded S&S character. 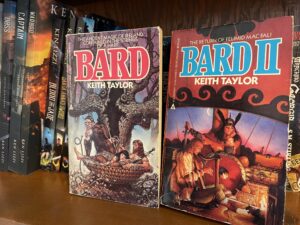 But I can’t include Felimid mac Fal without also including Kardios. Manly Wade Wellman’s bard is also a traveler with a (sort of) magic sword. But instead of a Dark Ages setting, Kardios wanders through the world in the aftermath of the fall of Atlantis (which he had a hand in causing.) He too relies on his wits and his sword arm, though he lacks any skill with magic. Kardios is a throwback, a classic hero in the mold of Ulysses or Sinbad.

And there you have it. Where have I gone wrong? Who did I leave out? Who should I have not included in the first place?

As always, I’ll end with the grift. Check out my Semi-Autos and Sorcery series. Book one here. Book two here. Book three here. Then tell me what you think of Karl Thorson as a contemporary S&S character.