A Farrago: Updates, Reviews, and Doings.

I hope to cram in a number of items in today’s post. A mishmash of topics. A salmagundi, if you will.

I’ll start with paying off last week’s hints and portents post. What I was dancing around back then was the news that I have a new book out. You can purchase the Kindle version here. The print version will follow soon, and there is an audio version in the works. It is the first in a three-book series. I hope you enjoy it. Reviews are starting to come in and so far they are positive.

The other week MBW was out of town for a couple of days. Once I put the HA to bed it was time for movies. Meaning yet another installment of the Stepson of the Bride of the Too Late Movie Reviews.

First up, Rambo: Last Blood. Will Golan and Globus please collect your child at the refreshment stand? He’s growling and threatening customers with a plastic fork. Seriously, this is a throwback 80’s revenge flick. There’s nothing wrong with it, really. It’s a lengthy set up, followed by some visceral, bone-cracking, blood-spurting action. Chuck Norris could have starred in this thirty-five years ago. It was fine, I suppose, but not exactly a resounding last hurrah for John Rambo.

Next, Fast and Furious Present: Hobbs & Shaw. This is a labrador of a movie: a big, dumb, genial dog of a film that just wants to please you. It flies its characters all over the world (with implausibly short travel windows) and has them engage in extensive, expensive fight scenes while exchanging quips. It is utterly nonsensical, but seems earnest in its desire to bring you along for the ride, seeming to feel that if the script doesn’t care where that ride is going, neither should you. Have you ever noticed that dumber the movie, the more likely it is that the “theme” of the story will be family. You’ve got a team of a half-dozen writers assembling a haphazard assortment of action sequences into a screenplay, using paperclips and scotch tape, and when they get near the end and realize there’s no connecting thread or concept they have to go back and toss in some dialogue to convince themselves that their film conveys a message. That gives the actors on the publicity junket a talking point. “So, Max Strongjaw, what is Bullets and Bikinis IV about?” “Well, Tracey, it’s really all about family.” I mean, it’s fine. Drink enough beer and you’ll probably enjoy it.

Third was Joker. If Rambo: Last Blood is an 80’s flick, Joker is a nihilistic 70’s movie. This is a movie that wants you to know it is important. And it does convey a certain gravitas, leaving you feeling that you’ve seen something seminal. You haven’t though. It is good. I don’t want you to think I didn’t appreciate it. Everything from the performances, the scenery, the cinematography, and the music is top notch. But there really isn’t anything groundbreaking about its portrayal of mental illness and nihilistic narcissism. Easily the best of the three movies I watched.

Yesterday I took MBW and the HA to the Kennedy School for the annual J.R.R. Tolkien Birthday Bash. The HA is starting to take more of an interest. I think I’ll read The Hobbit to her later this year, once she has her seventh birthday. She’ll get more out of the Tolkien Birthday Bash next year, once she’s become familiar with Mr. Bilbo Baggins. She had a good time anyways. The costume contest was a highlight, as you can see from the winning entry of The Bridge of Khazad-dûm and what was clearly intended to be a Balrog (though it couldn’t, since Balrogs don’t have wings.) 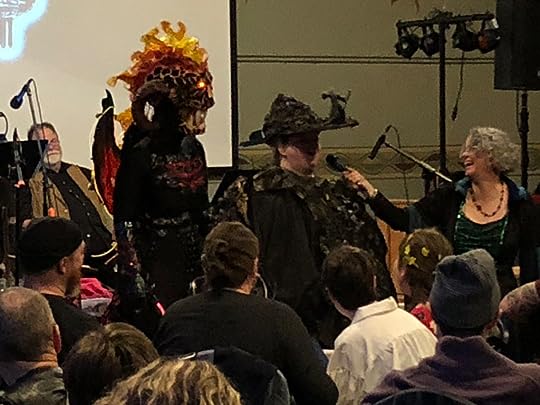