Brought to You by the Letter “A.” Resurrected Post.

Brought to You by the Letter “A.” 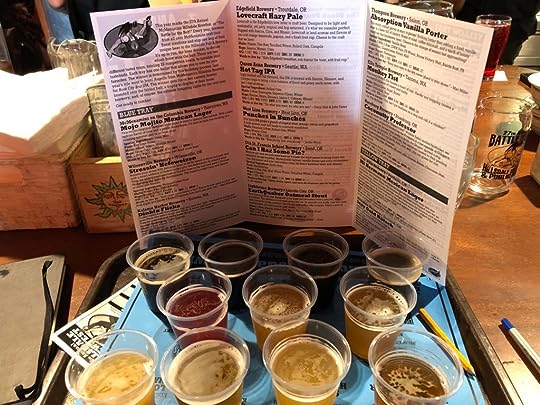 Yesterday I spent a couple of hours in the afternoon at McMenamins’s Hillsdale Brewpub for the annual Battle for the Belt, wherein the myriad McMenamin’s brewpubs compete for the popular vote of best beer. Each one enters a beer. Trays full of four ounce pours are provided. We drink, we fill out a top three ballot. We drop our ballots in the box. Simple enough.

I haven’t attended for a couple of years, since moving out to Sandy. It is inconvenient to drive to Portland, let alone across the city to the west side. But, as we were already on the outskirts, at our tax accountant’s office, we pushed on.

I brought my notebook, took notes on each beer. It was fun. I met friendly folks at the bar next to me. I filled in my ballot, then went to dinner at a nearby restaurant I used to frequent when I lived in the neighborhood.

At which restaurant I proceeded to abandon my notebook.

And so, unless the notebook somehow finds its way back to me, my promised tasting notes will not be appearing in this web log.

I am irked at myself. You should be too.

One way we could both feel better: buy one of my books. I’ll certainly feel better, and you’ll be entertained.