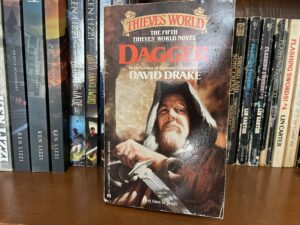 Thieves’ World was a remarkable achievement. The first few books, anyways, delivered some terrific stories, and the shared-world concept produced an outpouring of creativity. That included tie-in novels. Most people, I believe, gravitated toward Andrew Offutt’s Hanse Shadowspawn novel. I’m sure Janet Morris’ Tempus books had fans. The stories and novels offered us some fun new characters. But my favorite was Samlor hil Samt. (A name spell check despises.) Amongst all the thieves, warriors, demi-gods, and wizards, Samlor was just a merchant. A tough, stubborn, caravan master who merely wanted to do his job and do the right thing, take care of his family, and make a fair profit.

I thought I’d read all of the tie-in books. But happily, I discovered I was wrong, running across David Drake’s Samlor hil Samt novel Dagger in a used bookstore. I’m glad I did. However else would I have encountered a mashup of Sanctuary and the ancient Egyptian How Nefer-Ka-Ptah Found the Book of Thoth. (I wrote about that tale here.) Drake is also familiar with the legend of Apollonius of Tyana finding the mummy of Hermes Trismegistus gripping the magical Emerald Tablet. These two legends provide the foundation of the story. And it’s a good one.

We start in the Vulgar Unicorn, and it was good to see that dangerous dive again. Action moves out into the Maze and we encounter the worst of Sanctuary life, emphasizing that Samlor is visitor to Sanctuary, not a denizen. He’s more than happy to get out. When he does, we are essentially in a world grafted onto Thieve’s World. It could have been set anywhere, really. But by that point it doesn’t matter. We’re now in for a weird ride. You’ll either go with it, or the story will bounce off of you and leave you disappointed. In enjoyed it, though I have three criticisms. One: there extensive denouement seemed overly drawn out. The build up and payoff occurred fifty pages before The End. I understand why, narratively, this was necessary, but I think it could have been trimmed. Two: Drake can fall into over description. As a writer I understand that sometimes you get so fully into the scene that you want to describe precisely how something is held, how it feels, what adjustments must be made to perform an action, etc., etc. You have imagined it so fully that you want to clearly get across what you’d envisioned. And that can be great for immersion, to put the reader fully in the moment. But readers also want to know what happens next. It’s a balancing act. On the whole, Drake succeeds marvelously. Still, I noticed myself starting to breeze through certain paragraphs detailing certain mechanical actions in order to get on the results. Three: Drake clearly wants to use w Nefer-Ka-Ptah Found the Book of Thoth as a story-telling springboard. It works well enough in Thieve’s World, but it isn’t a natural fit or outgrowth. You can almost feel the shoehorn.

If you are a Thieve’s World fan, a David Drake fan, have an interest in Egyptology, or just like weird, spooky tales with some solid action scenes, then pick up Dagger.

Speaking of action, why not buy one of my action-laden books? Start with Blood and Jade, book one of Semi-Autos and Sorcery.

And now let’s catch up with Magnus Stoneslayer.

Outlaw life affords a substantial amount of freedom, dear diary. Not saddled by the twin burdens of responsibility and routine, outlaws eat when they please, sleep when they please, carouse and wench when the opportunity presents. Military discipline is a foreign concept to them. Rising before dawn to attend to husbandry or agriculture is for the farmers whose settlements they periodically raid. Commerce is for the caravan masters and intrepid merchants whose goods they plunder. No cares, no thoughts of tomorrow.

So, dear diary, the leader of such outlaws must be the most carefree and unhindered of all, right? Wrong. When no one undertakes responsibility, when no one concerns himself with routine, the outlaw band starves. Or is taken by surprise by a military patrol. Or dissolves as boredom, or hunger, or thirst takes its toll.

Seeing to it that a hundred shiftless wastrels are regularly fed – in the desert – takes some doing. Demanding that a couple of armed, professional malcontents give up a night’s sleep to stand watch is a daily ordeal of intimidating and browbeating nascent mutineers into compliance.

I have to run what amounts to a combination intelligence service and organized crime syndicate (the difference, I’m cynical enough to posit, equivalent to that between pirate and privateer.) Scouts in the field and spies in village and caravansary must be coddled, bribed, and threatened for information about potential targets. Town elders must be extorted; it is simpler to run a protection racket for regular supplies of millet, dates, mutton, and wine than it is to mount a full scale raid every time the larder runs dry.

I’m a busy man. And I’m enjoying every minute of it, dear diary.