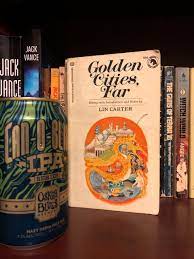 I think a brief reminder is all that is needed here: Lin Carter was a gifted and prolific editor. One of the volumes he put together for The Adult Fantasy series was a book titled Golden Cities, Far. The introduction is one of his better efforts, and seems to have been exhaustively researched. In fact, the book benefits from Carter’s notes, commentary, and humor throughout. This is the second of his collections of old myths, legends, and tales that are the roots from which the tree of heroic fantasy sprang (following Dragons, Elves, and Heroes, which I suppose I ought to track down at some point.)

Following is my comment on each entry in Golden Cities. I don’t comment on Carter’s commentary (this post would emit a glossy reek if I did) though I will say I found his remarks generally worthwhile.

How Nefer-Ka-Ptah Found the Book of Thoth. This slick prince of Egypt is a cat I can identify with. He’s the sort who grows so engrossed in reading he’s oblivious to all else. This trait of his leads someone to tip him off as to the whereabouts of Thoth’s Big Book o’ Spells up the Nile. Nefer-Ka-Ptah  (NKP from here on) is a bit of a magician already. He magics up some automata for dredging, dams up the river, and magics the guardians into paralysis — all except for the giant, unkillable snake. It’s Stygia, of course there’s a magic snake. This one seems to be a distant relative of the hydra, and NKP uses a variation of Herakles and Iolaus’ trick to defeat it. Then he steals Thoth’s book. He reads the first page. Then he does my favorite bit:

Beer magic. Hell yeah. Zymurgimancy? Things don’t end well for NKP and family. Thoth wasn’t pleased at the theft of his book, leading to the moral of the story: Don’t piss off the gods.

The Descent of Ishtar to the Netherworld. From the Sumerian epic Angalta Kigal she. In reading Carter’s free adaptation and riff on the ancient story (the Tammuz/Osiris resurrection concept), I can’t help but remember John Myers Myers’ take on the legend. Myers’ is more to my taste, but I like Carter’s take too. It should be read in a sort of chanting intonation. Carter sends Ishtar to the underworld to ask Nergal to return her beau to life. She’s got to get through the multiple gates of death, being stripped at each gate of her signs of power and authority, and ultimately her very dignity — that is, her clothes. The fragment Carter provides leaves her on her knees, pleading with the god of death. Seems like he could have included a bit more, the tease. I think C.L. Moore could have written a Jirel of Joiry riff on this one. Hell, maybe she did and I failed to notice while reading the story.

Prince Ahmed and the Fairy Paribanou. This is one of those fairy tales along the lines of Puss in Boots in which an astoundingly lucky younger son-type falls ass over tea kettle into a silk pillow-lined vat of money. I was struck by how the opening section of it reminded me of Jack Vance’s A Bagful of Dreams in that a potentate’s avidity for the esoteric and outré drives some of the plot. I always liked this one. It is a fairy tale: I don’t expect initiative and agency from the protagonist. Though I admit I didn’t recall the massacre at the end. Brutal.

The Talisman of Oromanes: The Merchant Abudah’s Adventure with the Ivory Box. Or, as I would call it, A Turgid, Plodding Parable of the Evils of Wealth, Pleasure, Power, Philosophy, and Science. The story follows the remarkably mutable Abudah as he learns that the only true reward comes through religion. Had I not already known this tale was written by a British clergyman, I would have probably guessed it. What a profligacy of purple went into this pablum. Give it a miss, I suggest.

Wars of the Giants of Albion. From the Welsh Historia Regum Britanniae by Geoffrey of Monmouth. Twelfth-Century pseudo-history. So, of course, gloriously silly. And, often, great fun. Get this, for example:

“At these words one of the foe, a lord by name Subardus, turned back with three hundred warriors to do battle with Corineus. But that mighty man of war, with his shield, warded off their blows and swung up his great axe and cleft Subardus in two halves. And then forthwith he made to charge the rest and made terrible slaughter with his whirly axe which never tired of drinking deep of the blood of the slain.

To and fro in their midst he rushed about, receiving the blows of all bravely, and returning as good as he got, if not indeed better, until he had slaughtered great numbers of them. Some had their hands and arms, some their vey shoulders, and some their heads or their legs, all cut off by his horrible blade. All fought him, ringing him about with a hedge of glittering steel.”

And then you’ve got a guy wrestling a giant and tossing him off a cliff. Jeff Monmouth, the Stan Lee of the Twelfth Century. Excelsior.

The Shadowy Lord of Mommur. From the French Romance Huon of Bordeaux. More like Huon the Bonehead. Has there been a more dunderheaded hero? Even the other characters call him on it, to no avail. Seriously, Huon is too stupid to live. There are a couple of cool scenes, and this version of Oberon is…novel. But frankly (pun intended) I feel dumber for reading this.

Oliver’s Brag. A Modern Treatment of a Carolingian Legend. Anatole France. I came to Anatole France by way of John Myers Myers (who keeps showing up in this post for some reason) tracing a reference in Silverlock. And I was glad of it: Anatole France dishes up the soup. This story merely reinforces my opinion. Go ahead, read it and try not to grin. Amusing stuff.

The White Bull. Voltaire. Droll, witty, and full of scriptural and mythical references. I can imagine Mark Twain having written this, except in the distinct Nineteenth Century American vernacular. Voltaire sat down, stuck his tongue in his cheek and began to satirize religion, politics, women, ludicrous myths, and whatever else came to mind. More funny stuff.

The Yellow Dwarf. Madame D’Aulnoy. A stark reminder that pre-Disney fairy tales are grim. (No pun intended.) No happy endings here. The supernatural is frightening. The moral: Don’t spoil your kids.

Selections from Amadis of Gaul — Arcalaus the Enchanter and The Isle of Wonders. Vasco de Lobeira. As Carter notes in his introduction to these selections, Cervantes considered Amadis of Gaul worthwhile even while disparaging most chivalric tales. And I can’t say Cervantes was far wrong. These hold up. The narratives are coherent and focused, not seemingly a mere random assemblage of events. Amadis is a more admirable hero than Huon of Bordeaux. I liked what I read. There are even a few good action scenes. You can perceive the DNA of Swords-and-Sorcery in these selections.

Orlando Furioso — The Palace of Illusions. Ludovico Ariosto. A serial novel by Dickens or a soap opera. Take your pick and call it Paladins in Love. Fun stuff. But I think it would work best consumed incrementally rather than binged. As I recall, de Camp and Pratt give us a taste of Orlando Furioso in one of the Harold Shea stories. You can really imagine the links leading from Ludovico Ariosto to Gary Gygax.

This book is the lab result sent back after Sword-and-Sorcery fiction swabbed its cheek and sent the sample off for analysis. The contents are the distant ancestors, the deeply buried roots from which sprang the S&S family tree. Find a few metaphors and have fun blending them. And, speaking of fun, how about a fun book or two? May I recommend a couple of mine? S&S meets crime fiction in Thick As Thieves. Sword-and-Planet meets sci-fi in Under Strange Suns.