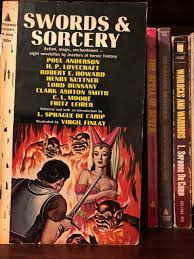 Swords & Sorcery is L. Sprague de Camp’s first entry in his four-volume series that spanned seven years. His introduction — an early sample of the short essay he’d return to with variations on the theme often enough — is a decent explication concerning what heroic fantasy consists of. (I found myself nodding in agreement at a portion of his opinion of William Morris.) With a promising introduction and a list of authors printed on the cover, I”m ready to dive in. But let me first make note of the gorgeous Virgil Finlay illustrations.

The Valor of Cappen Varra. Poul Anderson. You may perhaps recall Cappen Varra from the first Thieves’ World volume. Well, here he is starring in a story first published in January, 1957. This is fine, entertaining work in the grand old tradition of adventure stories, droll and witty, even though the ‘surprise’ ending is telegraphed early on. Score one for bards. Also, take note of the troll. A theme may be developing, in that monsters stand in for sorcery in these S&S yarns.

Distressing Tale of Thangobrind the Jeweller. Lord Dunsany. Somewhat more esoteric than the usual Dunsany fare. This one is an absorbing and gorgeously written piece about a bad man coming to a bad end. I believe a r-read might be rewarding. Or it might instead summon “that grim and dubious woman whose house is the night.” Gods and monsters, or monstrous gods make a grim appearance in this one.

Shadows in the Moonlight. Robert E. Howard. I forget how utterly brutal that opening section is. I’m sure it need not be said (though that has never stopped me) but you do not want Conan for an enemy. This is my favorite of Conan’s adventures on the Vilayet sea isles. We don’t get much reliable information about the black statues, but the hints are creepy and mysterious. The action is hot and bloody, and Olivia makes a spunky damsel in distress, the sort who returns the rescuing favor. Adventure cliches abound, and I don’t care. Bonus monster: the Missing Link.

The Citadel of Darkness. Henry Kuttner. In a clear nod to REH, Kuttner opens with an epigraph that commences “Hearken, O King…” NIce touch, if you aren’t going for subtlety with your homage. Sadly, I found this the highlight of the story. I enjoyed a couple of the early action sequences, but other than that, this one did not work for me. Prince Raynor is a cypher, a character without any characteristics. The cosmic weirdness gets slathered on too thick for my tastes. The story leans into the psychic battles for some of the drama. A little of that goes a long way. The signs of the zodiac as load-bearing components of the story structure felt gimmicky. And that ending fight? I get the impression Kuttner had neither been in, nor even witnessed a fight. All I can say is, if Suzanne Somers hadn’t been available, Prince Raynor should have been hired as the Thigh Master spokesman. All respect to Kuttner, but he could — and did — write better stories. Interestingly, this one involved more sorcery than monsters. I don’t think that means anything, just noting it.

When the Sea King’s Away. Fritz Leiber. A sort of sailors’ tale, with more than a bit of the shaggy dog story about it. But it’s written by Leiber and recounts an adventure of Fafhrd and the Gray Mouser at their most characteristic: Meaning acting as nigh-suicidal risk takers and big game skirt-chasers. So the lack of a clear resolution does not impede my enjoyment of the yarn. Exotically imaginative setting: check. Swordplay: check. Monster slaying (giant cephalopod): check. It isn’t Ill-Met in Lankhmar, but it’ll do. Bit of odd sorcery (next time you watch a plate-spinning act, remember this story) but the monster fights get greater shrift.

The Doom That Came to Sarnoth. H.P. Lovecraft. Is there a name for this sort of fictional history? Stories of invented places rather than invented characters? If so, it is probably German. The thing is, I dig it. I’ve always preferred HPL’s non-Mythos stories (though you could probably shoe-horn this one in.) I admire the imagination; the evocation of deep time; the weirdness; the things left unwritten, merely hinted. It ain’t heroic fiction — nary a hero to be found. Still, it’s good. Monsters? In a sense; non-human and extra-terrestrial.

Hellsgarde. C.L. Moore. Moore possessed a unique writing voice. Her stories are almost sui generis. I admire her work. There’s a “but” coming, you can tell. The difficulty I have, the tickle in the back of my mind, the fly in the whiskey, is the tendency toward detachment in her stories. Whether it is Jirel of Joiry or Northwest Smith, at some point in the narrative, the character begins to experience events detached from reality, some inexplicable, internalized ontology removed from objectively cognizable existence. The story loses its grounding. It becomes impossible to say what is really happening, what an outside observer would see occurring. Some of that goes a long way. Many of Moore’s stories consist primarily of it. Happily, Hellsgarde only wafts us away into a non-Euclidian spirit realm a couple of times. Instead, we get a moderately entertaining ghost story. The horror aspect of S&S seems to get quite a bit of emphasis in many of these tales. Monsters: I did mention the ghost, didn’t I?

The Testament of Athammaus. Clark Ashton Smith. This story seems somehow distantly related to HPL’s entry. There is a fictional history of a city and references to non-terrestrial beings from the stars, and a horrific end to an imperialist city. CAS, however, provides us with an individual narrator possessed of a fully-developed character, and a coherent tale. As with Moore’s story, (and HPL’s for that matter) horror overrides the heroic fiction aspect of this one. I liked it, though. Monster: Yep.

So, a fine collection. More Swords & Monsters than S&S. Of course neither S is meant to be taken as an absolute. The alliteration simply reads better than the bland “Supernatural Adventure.” Anyway, these are mostly good stories, even if none are the individual author’s strongest work. They are still better than the output of most other writers. There is a reason the contributors to this volume are considered greats. I recommend this book.

You know what other book I recommend? How about a post-apocalyptic/sci-fi/fantasy/action-adventure?