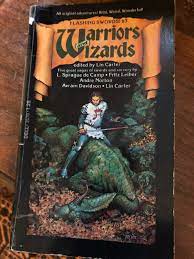 I have a number of well-worn anthologies on my shelves. It has been said that shorter fiction is the proper length for Swords-and-Sorcery. Maybe so. At least in an anthology the reader has access to multiple imagined worlds in a single volume instead of the single world of a novel. I thought I’d investigate this somewhat, revisiting these collections. And what better volume to start with than Flashing Swords #3?

The title of this volume is Warriors and Wizards, but I think a more accurate descriptor would be Fantastic Travelogues. Not a one of the authors herein limits the story to a single location. There are five authors herein, each providing a novella, apparently commissioned just for this collection. And it is a solid line up: L. Sprague de Camp, Fritz Leiber, Andre NOrton, Avram Davidson, and the editor himself, Lin Carter.

De Cap is first, and he sets the trend with a story that sees the protagonist crossing leagues, counties, duchies, and principalities in quest of the titular Two Yards of Dragon. Two yards of dragon hide, that is. It is de Camp, so you know what you’re getting. That may displease some. Not me. I’ve always enjoyed his style, like a droll professor sharing a beer with a favorite student, waxing loquacious upon a familiar topic. The topic may be important, but the professor’s first goal is to be an agreeable drinking companion. He’s never entirely serious. Even when de Camp is describing a harrowing action sequence, you know his tongue is stabbed deeply into his cheek. The travelogue style works well for de Camp, as he gets to establish and mock customs and laws of the various locales the protagonist and his Sancho Panza travel through. The protagonist is a knight, but this being de Camp, we don’t get a Quixote. Instead he is de Camp’s standard cynical, observant, wry, intelligent, and calculating hero. I, for one, was amused.

Fritz Leiber is next, with The Frost Monstreme. With this story, Leiber commences the coda to the Fafhrd and Gray Mouser tales. The two are on the verge of middle age, beginning to consider — or argue about — settling down. Becoming husbands, land owners, responsible citizens, etc. Now, there may be good S&S tales to be told about — well, about the life I’m leading now. But it may be that the subject matter is partly responsible for the fact that I find the Fafhrd and Gray Mouser stories from here on to be rather a let down. Not that this one is too bad. Again we have travel, but in truth, while many miles and sea-leagues are crossed, a description of  cold, icy seas is less than fantastic, though it does provide a good setting for the two heroes in their separate ships to clash, mislead by an old enemy and attacked by a new one. The new enemy, the ancient wizard/demi-god/alien, Khahkht, provides us with more capsule travelogue than do Fafhrd and Mouser. He travels about in a globe, within which sphere is a sort of inverted map of Nehwon. With this device, Leiber is able to remind us of the layout and cosmography of his world, in his glorious, arch style. It is a good story, but for me, it marks the end of an era, so re-reading it was somewhat bittersweet.

Andre Norton is next with a Witch World story. As I’ve written previously, I have little love for Witch World. This story does nothing to change that. I found it a chore, slogging through this rather dull tale of a hysterical blindness, weaving, and vague psychic power. Spider Silk sees travel from a boring fishing village to a relatively nearby forbidden island. Nothing is clearly described, since our POV character is blind. And nothing much happens. There isn’t much point in offering a spoiler warning, since there really is nothing to spoil, nothing a reader won’t figure out early on, perhaps from the title alone. Spider Silk is the dud of the bunch.

Next, Lin Carter adds a story to his own anthology. And with The Curious Custom of the Turjan Seraad we’re back traveling. That’s pretty much all we’re doing, flying down to an oasis, then joining a nomad caravan passing through the desert to pasture lands. This is little more than a shaggy dog story. Nothing really happens. But that isn’t the point of this story. The point is to play with words, with descriptions, scenery, etc., to closely approximate other descriptions, scenery, etc. that Lin Carter has read before. And he largely succeeds. Why? Because in writing a light, breezy tale, he keeps things light and breezy. This is supposed to be humorous, and it generally is. After the turgid Spider Silk, Curious Custom provides a palette cleanser.

Which brings us to the final course.

Avram Davidson provides the best of the stories. Caravan to Illiel is travelogue as story. It is a master class in condensed world building. From the opening that describes the city of Styr so well that I’d like to read a novel set there, the story follows the hero Corydon, in his new role as caravan guard, through one interesting location and adventure after another, all the while putting the pieces in place for the conclusion of a story the reader might not have noticed was occurring under his nose. The sheer variety and imagination displayed in the places Corydon passes through shows what Sword and Sorcery is capable of. Davidson is a vastly underrated writer. His style is reminiscent of both Clark Ashton Smith and Jack Vance. I’d recommend Flashing Swords #3 on the strength of this story alone, with the others as bonuses of varying value.What are your thoughts, readers, on this volume? Let me know. And, if all this traveling about has tired you, why not read a book set in one place? (I need to remember to mention my own stuff here. Thus that less than clever segue.) Check out Thick As Thieves.