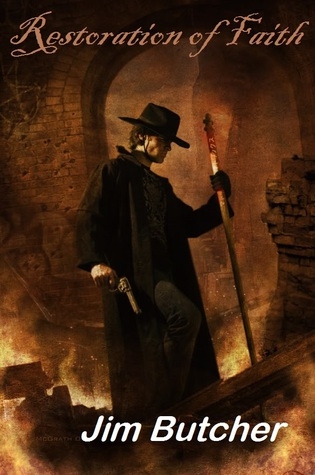 I had intended to write another post on anthologies. However, I was about three and a half stories through a collection when Peace Talks arrived. So much for that plan. I’m about halfway through the latest of Harry Dresden’s series of unfortunate events. Once I’m done, I’ll get back to revisiting Fafhrd and Gray Mouser’s shenanigans.

Reading Peace Talks, however, raised in my mind the question of whether or not the Dresden Files are sword-and-sorcery. Superficially, why not? The main character is a wizard. One of his buddies is a sort of holy warrior, often armored up and swinging a sword. So we’ve got both swords and sorcery right there. I recently wrote a post in which I enumerated what I thought were the essential components of sword-and-sorcery fiction. Why not run through those with an eye to Jim Butcher’s tales of Harry Dresden and a Chicago infested with the supernatural.

But, I’m going to do it in reverse order.

Number five was magic. Check. Plenty of magic. Chock full of magic. Brimming, stuffed, breaded with, deep-fried in, and fortified with a dozen essential magic vitamins and minerals. That one is easy. Moving on.

Number four on my list was excitement. Check. Butcher keeps the action fast and intense, with the ability to keep ratcheting up the suspense during extended fight sequences. Which occasionally feature sword battles. Decidedly weighing in favor of pro. I can practically see the scale moving.

Number three was horror. Again, check. There are horrific beasties, nightmare creatures, blood-sacrifices, dark gods, etc. Even a book centered around a horror convention. This factor might, in fact, be overplayed, militating against the books being S&S and instead being borderline horror. But, that’s a limb that I don’t think would hold weight, so I’m not going out on it.

Number two was immediacy, requiring a hero who instigates action and consequences, and isn’t merely a helpless pawn. Check. While Harry can find himself an unwitting dupe in someone else’s plot, he is never without agency. Turning the tables on those who think they are manipulating him is often part of the plot. Looking pretty good so far. Four down, bringing us to number one.

Number one was scale, the stakes cannot be too high. Uh-oh. Push the alarm button, we’ve got a problem. While some of the earlier books, and most of the short stories, keep the stakes relatively low, as the series has gone on the consequences have ramped up. To cataclysmic levels. The books have moved — first incrementally, then, full-steam ahead — into Epic Fantasy territory.

With that, I’m afraid I have to conclude that the Dresden Files are not S&S. Not even what I call Semi-autos and Sorcery, which is what I consider the equivalent, but set in our reality (more or less) rather than some secondary world or imagined past. I think the Monster Hunter International books might be considered Semi-autos and Sorcery, did they not run into the same problem as the Dresden Files. There is nothing wrong with playing for world-changing stakes in your fiction. It is merely a classification issue, moving into Epic Fantasy. But, since what I’m doing here is the equivalent of sorting the wing dandruff of the Angels dancing on the head of a pin, the verdict I have to hand down is negative, despite there being no crime or affront of any kind.

Where does that leave Urban Fantasy in general? I’m afraid I cannot opine. I’m rather ignorant of the genre. I think my Karl Thorson series (of which more anon) might qualify as Semi-autos and Sorcery. But I may have to leave that to some future hair-splitting pundit to determine.

What do you think?

Let me leave you with a link to my Amazon Author page, since I’m pushy that way.