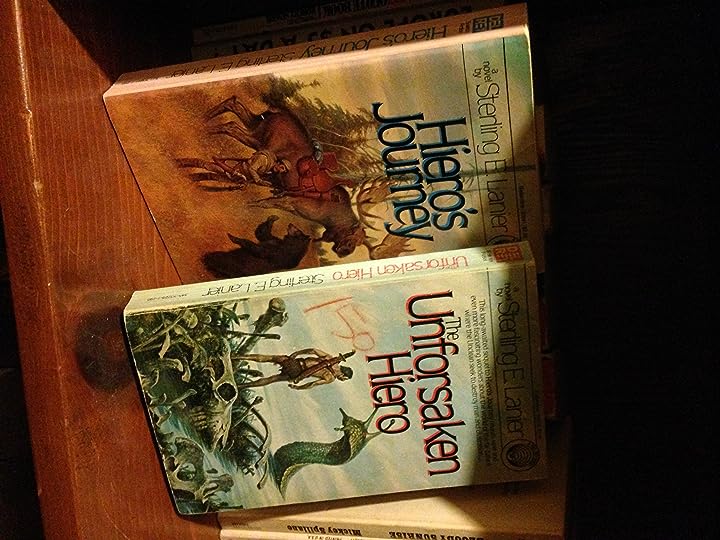 For many, the 1980’s were years shadowed by the specter of nuclear war. I never worried about it. But nuclear war — the chances, the scenarios, the aftermath — fueled the creations of filmmakers, writers, musicians, etc. It was the decade that brought Kris Kristofferson’s seamed, craggy face to our TV screens for the mini-series Amerika. It brought us Phil Collins caterwauling with puppet Thatcher and Reagan on MTV. And it brought us Sterling Lanier’s post-apocalyptic novels Hiero’s Journey and Unforsaken Hiero.

Hiero’s Journey was actually first published in 1973. But the 1980s brought a new edition, with the (to me) compelling cover art by the then ubiquitous Darrell K. Sweet. That riding moose! The bear in conversation with the guy in the frontier garb! Good stuff. I had to buy it. And I’m glad I did. This is great post-apocalyptic material. Telepaths, mutants, far-future societies with only dim memories of pre-cataclysmic history. Our hero, Hiero, is a Catholic priest sent off on a mission by his superior. (There seems to be a thread of belief among science-fiction writers that the Catholic Church would be a passable, though problematic, repository for the values, history, and technology of the Western world; the only organization that might survive to guard the last treasures of civilization. See also A Canticle for Leibowitz. Interesting notion.) Hiero encounters danger, new enemies, and politics. There’s plenty of action, mystery, and tension. And the sequel, Unforsaken Hierodoesn’t drop off by much.

I can certainly see how Lanier could influence Gary Gygax. Though my assumption is that these novels were more of an influence on Gamma World than on D&D. I never played Gamma World. I enjoy reading post-apocalyptic fiction, but playing a game in that world doesn’t much appeal to me. It’s all make-believe, tactical problem solving, no matter what the setting, but somehow I’m more at ease with a setting in which the characters can retreat to civilization, hole up in an inn, spend the loot, plan for the future — a setting in which there is a future. The sheer bleakness of post-apocalyptic settings, with the characters merely delaying the final ebbing of the last embers of civilization, isn’t an attractive game feature for me.

But it certainly was for some. Ever since the US learned that the Soviets had the bomb, tales of nuclear holocaust had proliferated. From classics like On the Beach, to 1950’s schlock sci-fi films. The 1980’s (in which I include the latter half of the seventies and up to the fall of the Berlin Wall) saw that focus include gaming. In addition to Gamma World (1978), there was Aftermath! (1981), Twilight 2000 (1984), and others.

The interest in post-nuclear holocaust stories has waned, though never completely disappeared. And with a newly resurgent Russia (in perhaps the first spasms of a country caught in the demographic death spiral) retaining an enormous nuclear stockpile, and with North Korea and Iran developing programs, and with non-state actors working in the shadows to acquire nuclear weapons, we may see a re-kindling of popularity in these stories. Sterling Lanier provided us, at the very least, some of the most entertaining. Hail the conquering Hiero!