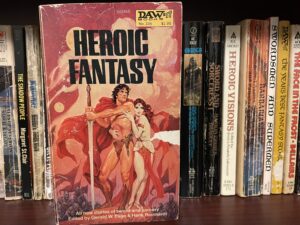 I finally got my hands on a copy of the anthology Heroic Fantasy. That’s a good cover, isn’t it? There’s a story in that illustration that I’d like to read someday. The introduction was…adequate. After reading so many Sword-and-Sorcery anthologies I’ve discovered the intros tend to cover the same ground. This one adds little or nothing to the field. But, how are the stories? Let’s answer that question.

Sand Sister. André Norton. Witch World is far from my favorite secondary world. I wasn’t happy to find that a substantial chunk — 40+ pages out of a 300+ — of HF is given over to Witch World. I found these pages wearisome. Not my idea of heroic fiction. There can be all manner of heroism, true. If you enjoyed this manifestation then I’m glad for you. I don’t begrudge others’ predilections in fiction. But for my part, I felt Sand Sister set a discordant tone. I face the next story with trepidation, since this one nearly bored me to death.

The Valley of Sorrows. Galad Elfandsson. Galad Elfandsson? Okay. Sorry, still suffering a bit of pique from the last story. The first paragraph — after an iffy first sequence — restored me to equilibrium. I’m back on solid footing. Here is a (mercifully brief, after Norton’s interminable tale) grim yarn reminding us of the debt S&S owes to horror. Well-written and atmospheric. If not my cup of tea, at least it is tea.

Ghoul’s-Head. Don Walsh. A refreshingly straightforward adventure story. And a samurai fantasy to boot. We get few enough of those. The gravamen of the tale is a myth I’m familiar with from other sources, but that didn’t diminish my enjoyment. Good stuff and suggestive of more involving the two surviving characters.

Astral Stray. Adrian Cole. Cosmic, inventive. A bit of The Traveler in Black, a bit of The Swords Trilogy, a bit of Dilvish the Damned, hell, a bit of everything. I admit unfamiliarity with Cole’s Voidal stories. I now admit curiosity. I can see this influencing (or sharing influences with) everything from Planescape to Grim Jack. Nexus of worlds stories are boundlessly (by definition) entertaining.

Blood in the Mist. E.C. Tubb. Now this is what I was hoping for when I purchased this anthology. All the essential ingredients for an S&S stew are present, all mixed in the pot in the proper proportions. Tubb keeps the plot bubbling, evokes the appropriate atmosphere of tension and sorcerous dread. The hero is suitably heroic in the classic S&S tradition. HF is worth the price for this story alone. Everything else is lagniappe. I’ve seen Tubbs Dumarest novels around but never bothered picking one up, considering them likely pure schlock. I may reconsider that ill-considered, knee-jerk impression next time the opportunity presents itself based solely on Blood in the Mist.

The Murderous Dove. Tanith Lee. Lee continues to delight. Here her prose is more…prosaic…, less floridly poetical than some of her other stories. In Dove she takes on a historical analog tale, as she did successfully in The Dry Season (Flashing Swords #5.) That one too eschewed the lyrical styling she employed in such stories as Perfidious Amber (Swords Against Darkness #5.) She has the versatility to employ the right tool for the job. And this job is a neat bit of misdirection set in a faux-Crusader era Holy Land, complete with Templar analogs, though Templars blended with Old Man of the Mountain style assassins. Cool, typically off-beat Tanith Lee.

Death in Jukun. Charles Saunders. Saunders delivers the goods. In my limited, but increasing experience with the Imaro stories, I have yet to be disappointed. Death in Jukun is a consummate S&S action yarn. This anthology is starting to spoil me. I’ll perish from a surfeit of topshelf S&S.

The de Petriche Ring. H. Warner Munn. With this novel we get a change of pace. Not that I’m complaining. We had some note perfect S&S. Now we get historical fiction. And — hard to pull off — a redemption story. Munn nails the language and details of historical fiction set during the Children’s Crusade. And he gives us a hero that truly must redeem himself if he is to garner sympathy from the reader. A touch task, but Munn pulls it off. Satisfying, reminiscent of Rafael Sabatini.

The Hero Who Returned. Gerald W. Page. There is a fairy tale aspect to this one. I won’t say Dunsaynian, but the narration and mode of speech is deliberately archaic and stylized. This isn’t a criticism. Rather it is praise for craftsmanship, for setting up of expectations. Hero is a good story, a well-written story. It gives we everyday, self-conscious and second-guessing average joes a moment to shine. So, I liked it. But I didn’t love it. Supernatural foe or not, the story lacked an over-the-top element, that final, bad-ass ingredient that is found in the best heroic fiction.

The Riddle of the Horn. Darrel Schweitzer. I generally like Schweitzer’s Julian stories. The pseudo-historical Christendom with its chanson de geste knights and quests allows an entry-level familiarity for me. I know what I’m getting into from the first paragraph. I’ve apparently missed several Julian stories. I don’t recall his losing a hand. This one is, of course, well-written. But I found it tended to drag. (It perhaps didn’t help that by the end of the first couple of pages I had the Rankin-Bass Heat Miser and Snow Miser songs running through my head. If you’ve read the story, you’ll get it.) The tale was okay, but I think it took too long to reach journey’s end. And I wasn’t convinced the destination was worth the miles.

The Age of the Warrior. Hank Reinhardt. This is a competent story of an aging warrior forced to come to terms with the inexorable nature of time. Fine, but not particularly novel take on the theme. It probably would have been better served in a lesser anthology, but unfortunately pales in comparison to most of the other stories herein.

The Mistaken Oracle. A.E. Silas. I don’t know what to think about this one. Silas has some things to say about expectations, about assumptions, about societal norms premised on idolatry and hero-worship. There is some depth to this one. But it left me unmoved. I prefer a bit more verve and fire in my S&S. I found this one rather cold.

Demon Song. F. Paul Wilson. A man on a mission. A down-on-his-luck mercenary in a strange country hires himself out to perform a dangerous task. Not bad. A formula I like that, in this case, avoids being formulaic. It relies a bit more on chance than I’d prefer, but that’s not uncommon in heroic fiction. Being lucky seems as much a necessary attribute of the hero as strength, speed, stamina, and steely nerves.

The Seeker in the Fortress. Manly Wade Wellman. Kardios of Atlantis. That’s all I need to know. Sold. And glad I bought. With Seeker, Wellman teaches a master class in economical story telling. The action moves fast, yet Wellman still provides all the details and background color necessary. And Kardios remains among the most likable of S&S heroes. Way to end HF on a high note.

Yesterday I received some positive information concerning my own short heroic fiction. But I’ll withhold details on that until a more timely moment. But it is always a timely moment to pick up some of my published fiction. How about Thick As Thieves? That’s a good one. Or browse here.