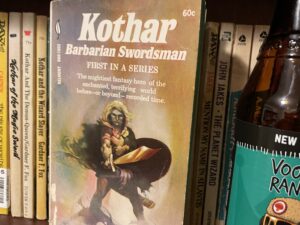 Gardner Fox’s first Kothar book is Kothar — Barbarian Swordsman. The title sums it up nicely. The book is a collection of three Kothar novellas. We get a sort of origin story, in which Kothar acquires his sword Frostfire, the introduction of his nemesis Red Lori, and some fast paced adventures, all prefaced by an excellent introduction from Donald MacIvers, Ph.D.

I’ve written about Kothar before. (Digression: A couple months back my web log essential disappeared. I still have no idea why. A helpful IT guy from Bangladesh helped salvage a small percentage of it, but close to 400 posts simply vanished. Happily I discovered they are all still available on my Goodreads Author page. So I am beginning the slow process of providing resurrected posts. I’m in no rush: I’ve got a career, books to write, and a family that ought to get some attention as well. The point is, the link to the old post now functions. Huzzah! End digression.) Nothing about this introductory volume alters my essential position on the Kothar series. This is stripped down Sword-and-Sorcery. Fox doesn’t dawdle. He has a tale to spin and he’s going to spin it fast. To do so he eliminates all fat from the narrative, providing the bones of the story, just enough connective tissue to let it move, and the minimal amount of skin and muscle required to give it a recognizable shape. A bit of world building that another writer would spread out in paragraphs throughout the story, Fox handles in one run-on sentence within a paragraph that is busy pushing the plot along.

And I’m fine with that. The Kothar stories don’t pretend to be anything they aren’t. This is quick, fun, light entertainment. You don’t always want a multi-course meal at a white tablecloth restaurant, overseen by an attentive waiter and a sommelier. Sometimes you want a plate of wings and a bucket of beers. I’m happy either way. (I had wings last night, in fact. Two sauces: Raspberry habanero and Lime cilantro. And a pint of dark IPA. Mmmm.)

Are there certain deficiencies? If you want to nitpick, sure. The world-building is inconsistent. I’d say sketchy, but the entire edifice is sketchy; that’s a feature, not a failing. (This is rapid, impressionistic charcoal drawing, not painstakingly composed, realistic oil painting.) Mentions of Kothar’s mysterious past (washed ashore in the barbaric northern land of Cumberia, from…somewhere) never lead anywhere, as far as I recall. (I still haven’t picked up book 4. Maybe it comes up there.) And Fox likes to throw in terms that don’t really fit in the milieu, words that are tied to a monotheistic European middle-ages rather than a (far future?) polytheistic fantasy hodgepodge: cathedra, prie-dieu, etc. Do I care? You know the answer to that. Of course I don’t. I devoured this slim volume. I found it goes well with double IPAs. Your accompaniment may differ, suit your own taste.

You know what just might suit your taste? One of my books. Pick up Blood and Jade if you are in the mood for S&S in a modern setting. I think you’ll like it.