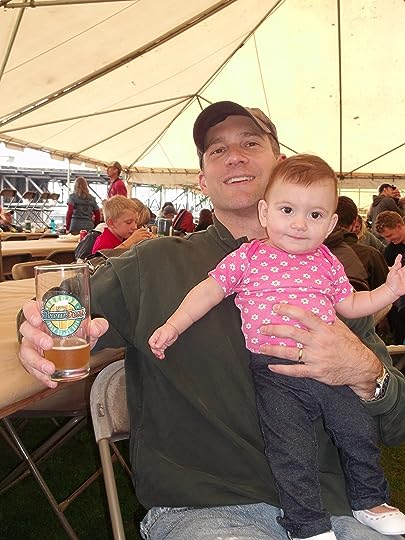 I’m giving the usual topics a miss today in order to discuss beer. Specifically the beers I sampled at the 2014 Oregon Brewers Festival. I do wonder about the missing apostrophe in Brewers. Is not the Festival possessed by the Brewers? Well, never mind.

I didn’t ride my bicycle down to the Portland waterfront this year. For the first time in the twenty plus years I’ve attended the Brew Fest, it was raining. At least it kept the Wednesday afternoon crowd somewhat in check. I drove down with lovely wife Isa and lovely daughter Victoria. Isa drove back. Frankly I wasn’t too displeased to skip the uphill bike ride home.

With festival tasting glass and wooden tokens in hand I began to browse. I decided that this year I’d avoid my usual IPA-heavy selections, sample a wider variety of brews. That’s – mostly – what I did. Following are my tasting notes.

Fort George Brewery & Public House. The Optimist. ABV 6.9% Verdant hp notes, light citrus. Not much nose. Could use more malt for balance. [Stepping away from my tasting notes for a moment. Yes, I said I’d steer clear of IPAs this year. I like IPAs. Lay off of me, why don’t you.]

Paradise Creek Brewery. Huckelberry Pucker. Berliner Weisse. ABV 4.7%. Pale color, like diluted grapefruit juice. Tart, a cherry-berry blend, far from the stereotypical cloying fruit beer. I’m not usually fond of fruit beers, but this I like, and the Mrs. concurs (though she prefered the Cider Weisse.)

Central City Brewing. Red Betty Imperial IPA. ABV 9%.  Okay, back to the IPAs. But an Imperial IPA so I’m not really cheating. This is terrific! Perfect balance.

Heathen Brewery. Megadank. ABV 8.2%. Epitomizes the Northwest IPA style You either like that style or you don’t. I like it. [Yes, another IPA. I think I was remarkably restrained.]

Upright Brewing Company. Old News Saison. ABV 5.8%. Decent. Saison’s are distinctive. I tend to like them and I like this one.

Here end the tasting notes. At this point the negative aspect of bringing along my infant, no matter how fetching and delightful, manifested. The hour of departure arrived with wailing insistence. So, a brief foray. But, as ever, rewarding. I think I’ll keep an eye out for Central City. Good stuff.