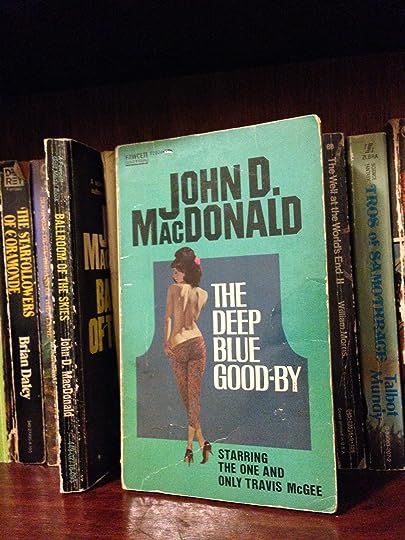 Sometimes a book does not live up to your memory of it, or to its reputation. Sometimes a book is, in as an objective fashion as you can manage, excellent but not thoroughly enjoyable.

I finished John D. MacDonald’s celebrated classic of American tough guy noir The Deep Blue Good-By that introduced the world to Travis McGee. I’ve read MacDonald before: one of his later Travis McGee novels, one of his science fiction novels, Ballroom of the Skies, and several of his short stories. No one needs tell me of his brilliant, prolific talent. I’m willing to stipulate that without reservation.

But. And you knew there would be one, didn’t you? I’m not as enamored of his stuff as perhaps I should be. I sensed a dismissive, disdainful note in Ballroom, as if science fiction was for MacDonald the literary equivalent of slumming. And then there is the famed and celebrated McGee. A well-drawn character. As he, along with Archie Goodwin, serves as one of the progenitors of Glen Cooks’ Garrett, I don’t want to speak too ill of him. (I’ll brook no disparagement of Garrett, you hear?) But Travis McGee is saturated with a post-war cynicism I find off-putting. He disdains everything about the country he lives in and the people who allow him to live the lifestyle he enjoys. Through him MacDonald writes jeremiads against marketing, profits, capitalism, banks, etc. Despite the essential role all of the above played in creating, for example, the Busted Flush on which McGee lives.

The Busted Flush itself is emblematic of McGee’s relationship to America. A houseboat, moored near the tip of Florida — part of the country, yet detached.

Travis McGee is a wonderfully realized character, yet one I find rather unlikable. Which may well have been intentional. I don’t know. But I do know that his characteristics render his stories less enjoyable for me than they might have been otherwise. He doesn’t exactly poison the soup, but he does sour it to a degree.

I’ll still read MacDonald from time-to-time, don’t mistake me. There will remain, however, some reservations, an unwillingness on my part to read him uncritically.

I also finished re-reading The Yngling, by John Dalmas. I bought a copy of this back when I was thirteen or fourteen. The fact that I sold it later maybe should have been a clue. But I’ve reacquired other books from my youth that I enjoyed the second time around. With The Yngling, however, I was disappointed.

There is, for example, the cliffhanger ending. Am I going to pick up the sequel(s) to find out what happens next? I don’t know. I took little enjoyment from the book. The main character possesses ESP. I find myself generally disliking books featuring psionics. And the main character of the Yngling is written as specifically abstracted, cold, inhuman. As with McGee, an unlikeable protagonist can limit the pleasure of a tale. Of course McGee is a complex and well-written character while Nils Järnhand is a rather flat cypher.

The author appeared to have been in a hurry. There is a great deal occurring, yet it is rushed through or happens off-screen. The post-apocalyptic setting offered room for some fun, pulp adventure. But what I read managed to squander the opportunities, turning in some rather dull set-pieces and then moving on to the next in a rather rote fashion. I had some hopes for the villain. Perhaps I should hold on to those hopes as I assume he must pop up again in the sequel(s.) His fate in The Yngling happened in a rather off-hand, anti-climatic fashion. I kept expecting him to reappear, right up to the cliffhanger, somewhat out-of-left-field ending.

So, I don’t know. Have any of you read beyond The Yngling? Is the story compelling enough that I should track down the next book?