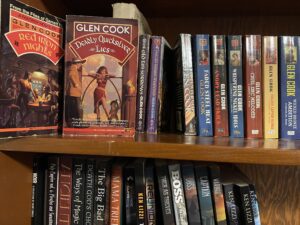 The re-read of Glen Cook’s Garrett Files continues and reaches the halfway mark. And I follow up with some pictures of the fun and games I enjoyed the day prior to this web log post. So, on with the show.

I dig this paragraph: “I did my best to get my money’s worth out of Puddle’s keg while Morley and I dissected cabbages and kings and butterflies and the old days that were never that good — though I’d had me a moment now and then. We solved the ills of the world but decided there was nobody in authority with sense enough to implement our program. We were disinclined to take on the job ourselves.”

Cook really hits his stride in RIN. The characters, snappy dialogue, and first person smartass narration are all dialed in. The Nero Wolfe analog ratchets up by the addition of Westman Block as TunFaire’s ersatz Inspector Cramer. Of course this means Cook must elevate the role of the Watch. In the previous books he had made a point of downplaying the status, functionality, and even existence of TunFaire’s law enforcement. But in order to bring in a Cramer stand-in he must rehabilitate or establish a police force.

Aside: I consider the fact that we have a Sarge working for Morley again a commentary on the war era setting rather than Cook forgetting he’d killed off Sarge in BGH.

Most of the supporting cast get at least a moment on stage, though Morley Dotes is relegated primarily to the background. Still, if one were to start the series somewhere other than the first book, RIN wouldn’t be a bad option. The plot moves. The villain (so to speak) is somewhat lackluster, but the villainy deserves a capital V. And everything you need to enjoy the series, going forward or back, is present. A high point in the Garrett Files.

Three years separate the publication of Deadly Quicksilver Lies from Red Iron Nights. It seems to me that Cook is feeling his way back into the groove; some of the narrative style is laid on thick in portions of the early chapters. I won’t cast the first stone. In any case, he’s taking his time, seeming to enjoy himself.

Cook works back into the swing of Garrett’s tone soon enough. Quote for evidence: “What I always wanted to do: storm a fortress at the head of a pack of killer elves, fugitives from an insane asylum, and a drunken parrot.” Classic.

This is the first book since OTS in which the Dead Man sits out the story. So, if not Rex Stout, who is Cook riffing on? Any suggestions? At times I get an almost Mickey Spillane vibe. I miss the interplay between Garrett and the Deadman. This one underscores the need for their particular symbiosis — Garrett muddles through, but at a cost.

On the Tinnie Tate front: Garrett’s dalliance with Chastity Blaine is a sort of precursor of things to come, and his disavowal of dating the daughters of the high and mighty is a sort of ironic foreshadowing.

The plot is murky. We get shadowy hints of many players after what turns out to be rather a red herring. Interestingly, for a fantasy novel in a series that plays into the weird aspects, this one turns out rather mundane, despite a suggestion of black magic at play. But what a brutal case. The body count is high.

But, no matter. We’re in TunFaire and Garrett is on the case. What case is secondary.

DQL is not a novel for that tedious species of reader ever on the alert for something to take offense at; eager to be affronted, usually on someone else’s behalf. Luckily, I’m not such a pusillanimous specimen, so I got a kick out of my (third?) read of DQL. If you, dear reader, are looking for something to read (after the Garrett Files, natch) may I suggest Under Strange Suns? I think I managed to offend at least one reviewer.

MBW and I dropped off the HA with her godmother for a few hours. Then we joined a couple friends for some range time. MBW is improving, though I suspect she regrets having elected to purchase a 9mm over a .380. I sense a new purchase in the offing sometime in next few months. After some expensive recreation, we repaired to a brewpub for pizza, beverages, and ax throwing. (Stickmen Brewing, I recommend the F-Bomb.) I emerged crowned as the hatchet-hurling champion, though by the skin of my teeth. And now I’ll bore you with pictures.