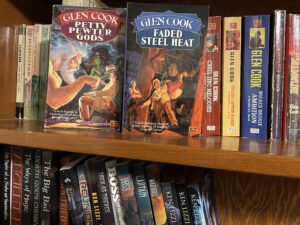 Glen Cook shifts the tone of the series in Petty Pewter Gods. There is always a lighthearted, wise-ass element to the books, but in PPG Cook seems to be interested in experimenting with a broader style of humor, almost slapstick.

Perhaps this resulted from the subject matter. The Garrett files have dealt with religion before, specifically in Cold Copper Tears. But CCT deals with churches and clergy, not with the deities themselves. In introducing pantheons riffing off Greek and Norse myths, Cook brings up ontological questions that he might not want to address, especially not in a breezy homage to Rex Stout, et. al. It could be that he deliberately chose a sort of cartoony, satirical note in order to sidestep the larger existential questions raised by the gods walking the stage alongside Garrett. Oh, he does address it, starting with the “gods are created by the belief of the worshipers” trope, then mostly ignores any deeper questions or implications, only to come back later with a moderately interesting alternate reality angle that sidesteps the bigger philosophical conundrums. It’s fine, exceeding a hand-waving minimum of explanation. But it doesn’t really feel like a Garrett story, instead like an early indication that Cook has run through his initial trove of stories; that he hadn’t expected the series to run this long.

It isn’t all Garrett-mouths-off-to-the-gods. Some of the serious elements Cook teased in earlier books began to show fruit. The veterans are coming home, finding all the jobs taken by non-humans and refugees from the Cantard — the land they’d just been risking their lives in. Tensions have reached the boiling point.

After letting Garrett fly solo in the previous volume, Cook brings the Dead Man back into play, leaning heavily into the Nero Wolfe/Archie Goodwin dynamic. It’s fun to see the little winks and nods to Rex Stout. And it is a fun book, once you let yourself get over the offbeat feel of the story. The ending is murky, lacking a coherent wrap up, and leaving certain question unanswered, or answered in such a fashion that I failed to comprehend. But it is still a Garrett book. And Cook even manages to foreshadow the next book, setting some pieces in place.

Four years after Petty Pewter Gods, we received Faded Steel Heat. As hinted at in PPG, Mr. Weider has a job for Garrett and sends Tinnie Tate, and a couple others of the type Garrett can’t resist, to offer him the case.

Cook has loosened up on the language. I don’t recall any F-bombs being dropped in prior volumes.

On the Tinnie Tate watch, I’m getting a better idea as to why Garrett makes the decision he does, come book #14. Ornamented by Garrett’s snappy, wise-ass narrative, her attitude and behavior can come across as cute and amusing. But, reading more closely…Well she’s no Lily Rowan.

Plot seeds sown in earlier books began to produce bitter fruit in FSH. The war is over. The veterans have returned. Rabble rousing demagogues are in position to take advantage of their confusion, despair over lack of work, long-simmering anger that the non-humans had been exempt from the draft, etc. Garrett finds his Weider job embroiling him with the various extremist groups.

Mr. Weider, in a manner similar to General Stantnor in Old Tin Sorrows, finds himself beginning to question the wisdom of hiring Garrett, though unlike Stantnor, he lacks any culpability for the tragedies that occur in his mansion during an elaborate social gathering.

The Garrett cast grows, as we are introduced to Pular Singe. From this point, Garrett will have to confront his prejudice against ratmen. Perhaps that fits the theme of FSH.

After the broad comedy of PPG, FSH is almost too serious. Almost. Cook takes his time, letting the pot slowly simmer. Perhaps the book could have moved along more quickly. But I don’t mind whacking through the weeds with Garrett, slowly putting together the threads of the mystery.

I think, had he so desired, Cook could have wrapped up the series with FSH. He’s dealt with all the stray plot points left wandering loose in prior books. And it wouldn’t have been a bad place to end things, with a solid — if not spectacular — entry. But I for one am glad he carried on.

Anyways, Happy Father’s Day. I spent most of mine on the road and I’m beat. I’m not even going to take the time to re-upload posts lost in the web log crash, so that project will fall behind a  week. Please forgive me if I launch right into the obligatory sales pitch without a segue. Buy Blood and Jade. It’s good.