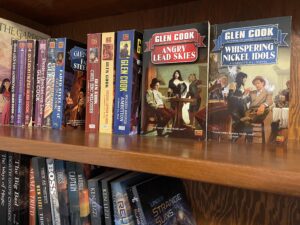 The reread continues. As with last week, traveling prevented me from continuing with the re-uploading of lost posts. Eventually I will get that project back on track. However, in the meantime, I’ve been reading. That is, rereading.

Along with Petty Pewter Gods —  the opposite bookend of the relatively serious Faded Steel Heat —  Angry Lead Skies is one of the pair of books that Cook wrote thinking, let’s “see what happens with this?” He’d done gods, why not aliens? Up front then, like PPG, ALS does not count among my favorite of the Garrett books, feeling — as does PPG — out of place.

But, is it still enjoyable?

An aside: is the first name of the character Cypres Prose a riff on the word Cypress or is it a nod toward the legal term cy pres? Those of us damned to work as lawyers want to know.

Cypres (Kip) Prose is a budding genius, whose powers of invention are goosed by aliens. That’s right. Flying saucer Grays. Fugitive aliens. Being pursued by alien cops. Aliens who have no magic. I’ve not quite grasped that: if magic exists in the Garrett universe (as it demonstrably does) why would it be confined to one planet? I’ve no objection to genre-mixing, but the introduction of UFOs and little green (gray) men to TunFaire has never felt right.

The humor is sharp in this one, leaning more on situational quirks than the usual Garrett POV smartassery.

The Rose triplets return! Looks like Doris and Marsha have finally picked up some Karentine.

The book meanders, gazes at its own navel, hangs about the kitchen table. There’s a hint of Cook thinking Garrett needs to grow up. And there’s more than a bit of Garrett being all lad. But it remains engaging throughout, an exemplar of Garrett’s hold on the readers here in book number what, ten?

Despite a plot involving feuding religions, Whispering Nickel Idols isn’t actually a return to PPG territory. For which I am thankful. For a Garrett book, the mystery is relatively mundane. Emphasis on the relatively. The story is convoluted, with multiple converging threads. I appreciated the return to the somewhat more traditionally mystery genre footing.

There is a strong Nero Wolfe feel to this one. For a good chunk of the story, Garrett gets laid up, and is thus sidelined, unable to do the footwork. So Saucerhead, Winger, and Morley get thrust into roles as ersatz Saul Panzer, Fred Durkin, and Orrie Cather. (My guess: Morley Dotes = Saul Panzer, Saucerhead Tharpe = Fred Durkin, and Winger = Orrie Cather.) We even get what I think is a reference to Lieutenant Rowcliff.

The Dead Man gets center stage in this, with Garrett largely doing his bidding, fi\tting more neatly the Archie Goodwin role. The Dead Man gets to growl, insult, plot, and stage his coup, while Garrett and co. arrange for various players to drop by for interviews.All that is missing is the red leather chair.

Glen Cook had done his usual masterful job in laying down intriguing bits of business in books that aren’t resolved, only to fuel subsequent volumes. We get some payoffs here as well as some new hints.

In all, a middling Garrett book. I’ll take it.

If you’re not reading the Garrett Files (and you should be, if you haven’t already) may I recommend one of mine? How about Under Strange Suns, my action/sci-fi homage to Edgar Rice Burroughs’ John Carter of Mars.