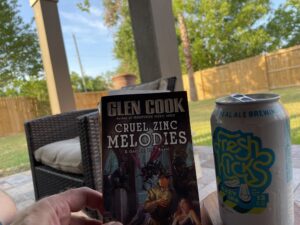 This is a good one. As with the best mystery plots, the seemingly simple grows increasingly complex. There is a lot going on. And Cook is planting more clues regarding the Tinnie Tate/Garrett relationship. I’d ignored those last time through Cruel Zinc Melodies. I wanted only to see the good side of Tinnie Tate and ignored the occasional fluttering red flag.

The Dead Man reflects Nero Wolfe’s arrogance well in this one as well as showing the rare moment of chagrin.

(Disconnected Aside/Theory: Garrett’s paranoia directed at horses is a reference to Nero Wolfe’s distrust of cars and other machinery. Filtering Wolfe through Goodwin in the form of Garrett. Just a theory.)

Maturing is a theme of the book. Much of it revolves around the question of Tinnie Tate and Garrett’s relationship taking the next step. Cook does an excellent job of portraying two flawed individuals utterly uncertain what to do. Garrett is growing up, and it bothers him. This sort of character development is a  break from timelessness of Goodwin/Wolfe. I think the first time I noticed this it bothered me. I wanted endless volumes of Garrett, set in a perpetual present, with the characters as unchanging as a fly in amber. Maybe it is a sign of my own aging (no, damnit, no!) that I have a greater appreciation for what Cook is trying to do. Do I like it, though? I’ll weigh in on that later.

Glory Mooncalled gets name-dropped. Was this a reference for future books that may never be written? Someone go ask Mr. Cook.

We are introduced to the Algardas, a family that will play significant roles in the remaining books. The introduction inclines us to look rather askance at both Barate and Furious Tide of Light. A narratively clever choice.

I think an argument can be made that this would have made a fine culmination of the series. The story ends on an emotional high. Garrett’s future appears promising. It could work as the happy ending. Let’s see if the last two books support or refute that notion.

Meanwhile, I’m still camping in my own new house, awaiting the much delayed arrival of the shipping container holding most of my worldly possessions. The novelty value has long since worn off. My office furniture, upon which I earn my daily bread, consists of an old chair I found in the garage and a cardboard box upon which to set the computer when it isn’t on my lap. But, life goes on. For example, here’s a link to a promotional video of me nattering on about writing.