The Sword of Welleran. Speculations on the Afterlife. 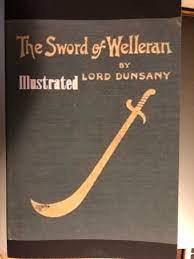 Edward Plunkett, Lord Dunsany, is probably best known for The King of Elfland’s Daughter. Otherwise perhaps for his Jorken’s stories and his clever, witty fables of the foibles and fallacies of gods and men. The Sword of Welleran is a collection of his earlier works. I think, perhaps, his relative inexperience shows when these stories are compared to his later, more mature writing, though I’m hardly qualified to judge. Still, I found the collection well worth my time, starting with:

The Sword of Welleran. A parable in search of explication. The unnamed dreamer (Dunsany himself, perhaps, as a recurrent character?) narrating this tale provides no moral of the story. What are we to make of the sacrifices of the heroes? Of the city’s reliance upon reputation and its failure to maintain martial standards? Of the heroes’ ghostly return? (Make note of the role of afterlife.) What to make of the new, young hero’s abhorrence of the Sword of Welleran. Beats me. There may well be a message here, but if so, I remain too dense to grasp it. Still, I enjoyed reading the tale.

The Fall of Babbulkund. This is not a story. It is instead a fabulous travel guide, a catalogue of wonders written by an Old Testament poet, painting the glories of the decadent city of Babbulkund and portending its doom. I recommend reading this with a fine tawny port. Slippers and a smoking jacket are optional, but certainly appropriate.

The Kith of the Elf Folk. A speculation only: Tolkien read and absorbed this one. There is something of the Dead Marshes, a (coincidental?) Gladden Fields, a hint of Leaf by Niggle, a glimmer of Tom Bombadil, and fey, melancholy elf-kind. Note the discourses on the soul and Paradise.

The Highwayman. If the previous story might have — should have — influenced J.R.R., this one might have influenced REH as he wrote Solomon Kane. Dunsany reminds us of the thread of gold in even the foulest soul. “…one sin at which the Angels smiled.” Damn, that’s good. Note the POV of the dead man.

In the Twilight. A lengthy description of walking into the light. Quite picturesque, providing images that could come straight from The Wind in the Willows. It becomes impossible to ignore at this point that death and the afterlife are recurrent themes in this collection.

The Ghosts. Rather on the nose, but accurate. A take on the Gothic horror story, and a good one. Logic meets the supernatural. Was Dunsany obsessed with life after death? This was, after all, the era of spiritualists.

The Whirlpool. This is more the Dunsany I expect, with this short vignette about the god of the whirlpool. And yet even in this the book’s theme recurs, as the whirlpool discourses upon the souls of sailors and the Happy Isles.

The Hurricane. Another vignette. But here we get an abrupt departure from the theme. Dunsany indulges in what I presume are warring impulses: a dislike of the effects of the industrial revolution (which as a nobleman of leisure he could tut-tut about from Olympian heights) and his clear love of humanity. How to destroy what Man has wrought without destroying Man? And he cannot do it.

The Fortress Unvanquishable, Save for Sacnoth. I’ve written about this excellent tale previously. The break from the theme continues.

The Lord of Cities. This is a philosophical piece more than it is a story. It opens in a fashion that makes me think of Bilbo musing upon roads. But it transitions into a discussion of Man versus Nature, of primacy, Is there value in Nature except through the lens of Man’s perceptions? Or — in a take E.A. Poe would appreciate — is the entire enterprise, the work of both Man and Nature, ultimately for the benefit of the spider?

The Doom of La Traviata. We return to the theme after a three-story interval as we witness the post-mortem judgement of the soul of La Traviata. For those who need a refresher on Verdi, La Traviata is the story of the courtesan Violetta. She gives up her chance of happiness at the behest of her paramour’s father. Dunany picks up the story after her death and considers the wheat and chaff admixture of her soul. What to make of Dunsany’s judgment? Is it the vestigial Victorian ascendant over the 20th century modern man? I dunno.

On the Dry Land. Love and death. We finish up more or less on theme. I wonder, did Dunsany feel this way: ambition thwarted by the demands of love/marriage? Or perhaps writing this piece was a cathartic exorcism of a passing malaise.

As a work of Swords-and-Sorcery I’d have to give this collection a failing grade. I’d consider only a couple of these S&S: the title story (barely) and the classic Fortress Unvanquishable. But time is never ill-spent reading Dunsany, even when he is pondering the afterlife rather than reveling in this one.

I’d like to think that time is not ill-spent reading my scribblings either. I’ll have announcements to make as the year goes on concerning upcoming works. But in the meantime, why not try my crime/fantasy, S&S heist novel, Thick As Thieves?