To Cull or Not to Cull? (But Not Kull.) Plus, Savage Journal Entry 12.

I doubt it is possible to own too many books. Yet at times I peruse my shelves, see a volume, and ask myself if I have any solid reason for keeping it. Why do I hold onto this particular book? Why should I? Why not sell it? 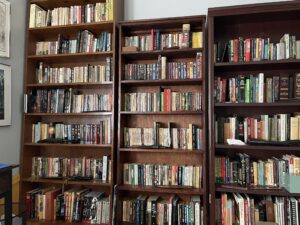 One of the questions I ask myself in these situations is “Will I ever read this again?” Now I do re-read books, so that isn’t an entirely empty question. I’m not sure precisely how many times I’ve read The Lord of the Rings. And I’ll certainly grab a volume or two of Fafhrd and Gray Mouser stories just to enjoy the exploits of the twain again. That is only two examples. Yet it must be said that most of my books I’ll never read again. Am I likely to pick up Life of Johnson again? Or The Thirty Years War? Probably not. But I might, even if merely for reference purposes. What about The Mask of Circe? Or The Texas-Israeli War: 1999. I recall enjoying those. But I probably won’t read them again. Probably. But I liked them, so best not to take the risk of getting a hankering to revisit them but no longer possessing a copy

What about books I didn’t like? I did not care for The Shadow People. But Margaret St. Clair is in Appendix N, so I really ought to retain at least something of hers, right? If only for merely curatorial purposes. But then there is something like The Road to Corlay, which I didn’t dislike but which left no positive impression. There is no compelling reason to keep it. I have no interest in passing it down to the HA. It was not influential, possesses no importance within the history of genre fiction. Why keep it? Or take Tales of Neveryon, much of which I found repellent. It does, I think, carry some genre importance, but generally of negative connotations. Do I want it on my shelves?

It isn’t as if I’ve never sold books before. There was a period when I was 18 or 19 that I was compelled to sell books for gas money. Sure, I’d like to have those back now. (Or I think I would. I repurchased a copy of The Yngling. I’m afraid the memory of it would have served me better.) I’ve sold others for reasons other than impecuniousness. Once I’d finished assembling all the Horseclans books I sold the collection. It opened up a nice stretch of shelf space.

And yet I remain reluctant to part with what I have. Perhaps it is the instincts of a collector. Or perhaps I’m merely a hoarder with an extremely limited symptomatic range.

If you’d like to help fund my addiction, why not pick up one of my books? If you want to take a break from Amazon purchases, Barnes and Noble can help with such books as Reunion, Under Strange Suns, or Thick As Thieves.

For those still following in the footsteps of Magnus Stoneslayer, here’s the next entry.

Let me extol the virtue of the humble loincloth, dear diary, that simple, intimate garment, that most minimal of vestments, a bare strip of cloth wound about the loins (hence loin cloth, of course.) It is the first thing a savage possesses, and sometimes the only thing.    Now, for example.

My trek south to Bandahar took me through land recently annexed to the Zantian Empire, a narrow finger stabbing westward on the map from the clenched fist to the east, a wedge thrust between quiet petty kingdoms to the north and the decadent city states of the south. It was my misfortune to run afoul of an Imperial patrol.

Quite the fracas ensued, dear diary. Unless he is willing to enlist as a Zantian auxiliary, a barbarian receives no affection from an Imperial. Some other time I might just have enlisted; I’ve signed upon the spur of the moment with other military, or quasi-military organizations before. I’m a savage, a creature of the moment. But at this moment I’m on my way to Bandahar and I disdained their enticement to enlist – i.e. abuse and threats.

I made a good account of myself, laying several of them low once the action commenced. Eventually I took a glancing blow to the top of my head – more than glancing, really, but I’ve a skull like a wild bull.

I woke to a headache and to a surprise. The surprise was that I was alive. The surprise gave way to the commonplace: the Imperials had stripped me of all I owned – except my loincloth. Seldom do brigands take the loincloth (or breech clout, I like breech clout. I think I’ll use that or the remainder of this entry, dear diary.) Whether due to reluctance to handle the intimate apparel of another man, discomfort at the thought of where precisely that strip of cloth has spent unknown hours between washings, or a fundamental decency in the basest villain, the breech clout is seldom pilfered. Only when humiliation is the intent will thieves strip the victim of the breech clout, or if the thief is at the uttermost limits of desperation.

So, dear diary, tomorrow I will continue my journey unencumbered by any civilized accouterments. Look out Bandahar.