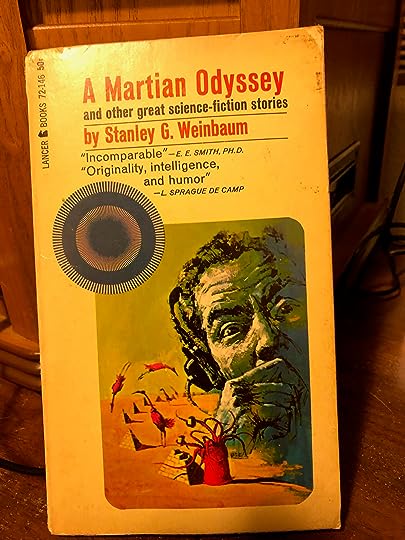 Stanley G. Weinbaum tantalizes we later generations. What else could his fertile mind have produced had cancer not taken him at the age of 33?

Weinbaum’s enshrinement in Appendix N is another head-scratcher for those who remain incredulous that Dungeons and Dragons’ influences include science fiction. Pick up a Weinbaum collection and there’s nary a wizard or sword-swinging barbarian to be found. His noteworthy output is science fiction and, generally speaking, not soft science fiction, not Burroughs-esque sword and raygun sci-fi.

Though Weinbaum’s degree was in Chemical Engineering, he seems to have had a passion for biology. Bizarre, alien life forms and wild permutations and mutations infuse his writing. Therein, I speculate, lay Gary Gygax’s interest. A reader of Weinbaum’s can glean all manner of foes to bedevil adventurers beyond the usual run of orcs and dragons.

Gygax would certainly have been familiar with A Martian Odyssey, Weinbaum’s masterpiece and most famous story. I’m not going to rehash the extensive influence of this story. A writer who has influenced Bugs Bunny cartoons requires no further boost from me. But perhaps it was Weinbaum’s creepy, intelligent plants that inspired Gygax the most. Perhaps the inscrutable, alien motivations of many of Weinbaum’s creations intrigued him as well: how do adventurers deal with menaces that are not driven by familiar desires and needs?

Stanley G. Weinbaum may be in danger of slipping into obscurity. If you haven’t already given his stuff a read, do yourself and his legacy a favor: pick up a collection. Enjoy the strange trip, then wonder what might have been.

PrevPrevious2018 New Year’s Eve Post. Resurrected Post.
NextTo Cull or Not to Cull? (But Not Kull.) Plus, Savage Journal Entry 12.Next