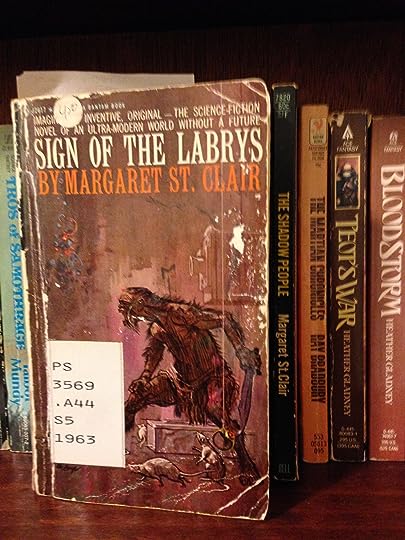 I’ve been reluctant to write this one. You know the ubiquitous maternal aphorism “If you don’t have anything nice to say, say nothing at all. “ And I dislike offering particularly critical opinions of other writers. After all, who am I to judge.

The first book by Margaret St. Clair I read was The Shadow People. I’m not going to offer up a single word concerning it. Understand?

But I’d read positive comments regarding Sign of the the Labrys. With my prior experience in mind, I had the library find a copy for me through inter-library loan instead of shelling out cash from my own pocket to procure a copy. I began it with somewhat higher hopes. Now, unfortunately, I have to offer an opinion. That makes me a bit uneasy.

Sign of the Labrys began on, for me, a rather ambiguous note. We appear to be in post-apocalyptic territory. That can be good or bad. In this case the rather banal narrator inclined my opinion to the negative. (In fact, most of the characters in Sign of the Labrys come across as more or less cyphers with little development or depth.) But things began to pick up once our ‘hero’ began his descent into the multi-level survival shelter, and especially once he encountered the living carpet of white rats. Things began to move more rapidly and I let myself be carried along by the action and sheer, gonzo developments. I was picking up notes of A Boy and His Dog, Logan’s Run, The Cornelius Quartet, Philip K. Dick, and Aleister Crowley, all filtered through a dystopian, post-apocalyptic, psychedelic Wiccan lens. Not really my bag, but for a while it carried me along nicely with a sort of throwback Weird Fiction vibe.

But it lost me. Despite its mysteries it grew dull. I’m afraid I’m not well enough versed in the whole Wiccan milieu, nor sympathetic enough to it, to really appreciate a Warlock’s Pilgrim’s Progress. And, near the end of the novel (luckily, a very short novel) it is revealed that one of the secondary characters had committed an act of such enormity, of such a morally repugnant nature that I was temporarily ejected from the suspension of disbelief. And then the other characters failed to respond with anything near the proportionate amount of revulsion — and these two were supposed to be the protagonists. Frankly, after that, the last twenty or so pages were an effort. And not really worth it for the pay off.

They say the speculative fiction is the literature of ideas and that such things as character development and literary style are irrelevant. I don’t buy that. But stipulating it for the sake of argument, if the idea is uninteresting, what are you left with?

So, Sign of the Labrys as literature? Can’t recommend it. Sorry. It might work for you, though. If so, great.

Now, the Appendix N analysis. I’m happy to report that here Sign of the Labrys comes through like a champ. You’ve got your funhouse dungeon complex with multiple levels. You’ve got secret passages, often leading from one level to another, even bypassing a level or two. You’ve got quirky encounters with odd beings who may or may not mean you harm. You’ve got magic, psionics, illusion, teleportation rooms. You’ve got people seeing through walls, methods to pass through walls or levels by manipulating the stone. You’ve got a variety of fungi with differing functions and effects. I can really see Gary Gygax farming this book for ideas.

So, for gaming history scholars I can recommend Sign of the Labrys. But for anyone else, I’d suggest considering options other than Margaret St. Clair. There is a misanthropy and an unpleasant sense of paranoia about her works. She’s an author with an axe to grind, and I find the shrieking of the whetstone irritating.

I did, however, get a kick out of the back cover. Check out this happy horseshit. Here’s how it reads:

Women are closer to the primitive than men. They are conscious of the moon-pulls, the earth-tides. They possess a buried memory of humankind’s obscure and ancient past which can emerge to uniquely color and flavor a novel.

Such a woman is Margaret St. Clair…”

OK, that’s all of that nonsense I can manage.

PrevPreviousOde to an Eclipse. Resurrected Post.
NextSavage Journal Entry 5. Plus, What are the Five Best Science Fiction Films?Next