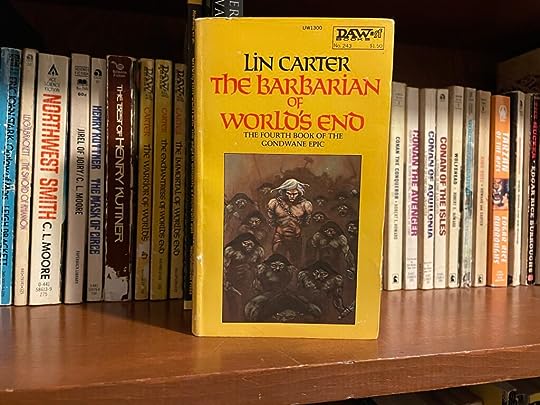 Lin Carter’s Gondwane Epic continues in The Barbarian of World’s End, the fourth volume. In a pleasant departure from the previous book, this one actually has a plot of sorts. Our sporadically child-like and sporadically wise hero, Ganelon Silvermane, in an almost Conan-esque fashion, rises from captive to Warlord of a barbarian horde. His goal then becomes to render the horde harmless, leading a migration between and around settled areas.

Unfortunately Barbarian holds up well as a novel only in comparison with book three, The Immortal of World’s End. Read on its own merits, it comes across more as an outline rather than a fleshed out novel. Carter takes shortcuts, telling instead of showing. In the tradition of the series, he’s more interested in his inventions than in the characters or the narrative. And — still in keeping with the rest of the series — many of those inventions are just silly. Carter probably snorted with laughter at some notion, sat down at the typewriter, and pecked away. The story itself exists only as an armature upon which to hang the baubles and bangles he giggled into existence.

Given that reality, it is probably for the best that the book is short. But it doesn’t compel me to rush out and acquire the next book. I suppose I’ll get around to it eventually, when I’m in the mood for something so light it could almost do service as an air bubble.

My own stuff may not be as frothy, but it is (I’m reliably informed) entertaining. Treat yourself, you deserve it.

View all of admin's posts.