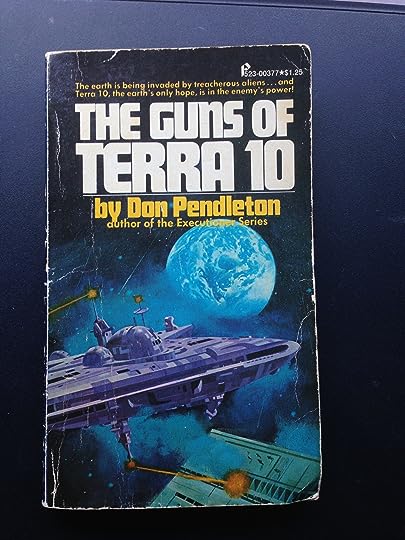 You may have known it, but it came as a surprise to me: Don Pendleton wrote science fiction. Mind blown, right?

Wait, maybe I should back up a step. I’m proceeding under the assumption that you are all familiar with Don Pendleton. That could be a mistake, what with the assuming and all. Don Pendleton is known for writing the long-running men’s adventure series The Executioner. You may remember seeing these paperbacks in the checkout aisles at grocery stores back in the eighties, the covers featuring a dark haired man with a gun (that would Mack Bolan himself, the eponymous executioner), a hot chick in the mid-ground, and maybe some armed baddies in the background. The books were probably shelved next to others with such titles as Stony Man, or Phoenix Force.

I think I’ve read a couple of the Mack Bolan books. I vaguely remember reading one in a library in Hawaii. And I think I read at least one of the related titles. I seem to recall reading one back in high school, about the same time my friend up the street was running me through solo Top Secret adventures (though that may be trick of the memory creating false cross-references.)

So anyway. That Don Pendleton. He also wrote science fiction. I just finished The Guns of Terra 10, a 1970 paperback that almost reached 190 pages in length. How was it? Really, not as bad as you might think. Pendleton was actually playing with some interesting themes. Or perhaps he’d just finished reading A Brave New World while sitting through re-runs of Star Trek. But to give him credit, he did seem involved in the idea of human genetic engineering and its potential long term consequences. He also worked out his own baloney FTL concept instead of relying entirely upon handwavium engines. I particularly enjoyed his idea of twin guns, one firing matter, the other anti-matter, with the two meeting at the aiming point. Pretty cool.

I won’t go so far as to recommend it. But if you have the hankering for the sort of fiction in which fist-fights lead to friendship and understanding, or are in the mood for loving, extended descriptions of breasts, or want to enjoy a crew of uneducated, agricultural yokels essentially dropping into the bridge of the USS Enterprise and working the controls with no appreciable concern for the learning curve — then, hey, this might be the book you’re looking for.