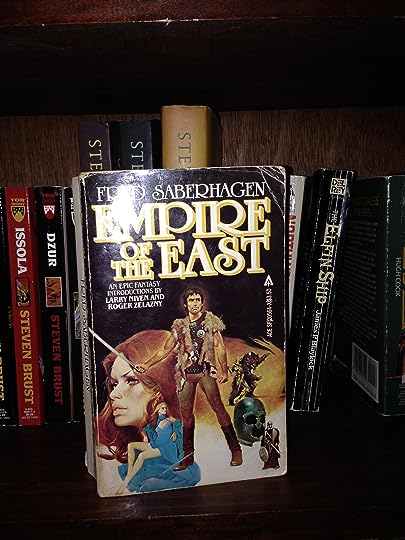 I’ve reached Fred Saberhagen in my Appendix N irregular series of posts. And I’m extremely pleased by that since it afforded me an excuse to re-read Empire of the East. True, one cannot do Saberhagen justice by concentrating on Empire of the East alone, but that’s what I’m going to do anyway.

I don’t think one could realistically consider Empire a classic, certainly not seminal. But in my opinion it is the acme of its type, a near Platonic Ideal of a post-apocalyptic, sci-fi/fantasy adventure novel. If you only read one, this is the one. And it’s terrific. It is absorbing. It doesn’t feel like a 550 page book. It reads much faster, like a slim pulp. That is probably because it consists of three slim volumes, packaged together. But what a package. And one written by an author in prime form. There isn’t a wasted word, yet Saberhagen builds a fully realized world, managing to achieve much of the world-building between the words — providing enough of a pencil sketch for the reader to fill in the rest.

Empire’s place in Appendix N is richly deserved. If Howard, Leiber, Vance, and Anderson provided the substrate for D&D, Saberhagen built the iconic superstructure atop it, offering a nigh-perfect example of what could be done with the sort of heroes, wizards, monsters, and scoundrels the others had written of. Empire has it all, in spades. Wizards, both dastardly and good. Demons. Monsters. Remnants of strange technology. A young farm boy thrown into peril and adventure. Noble beasts and cruel lords. Magic items. Curses. I wouldn’t be surprised to learn that Gary Gygax borrowed Elementals from Empire of the East. And, if someone tells you that the Monk character class has no place in an occidental fantasy world, well he may be right. But the minor character Mewick might suggest a more nuanced view.

In Empire of the East Saberhagen served up adventure fantasy in the butter zone. The Goldilocks zone: It is just right.