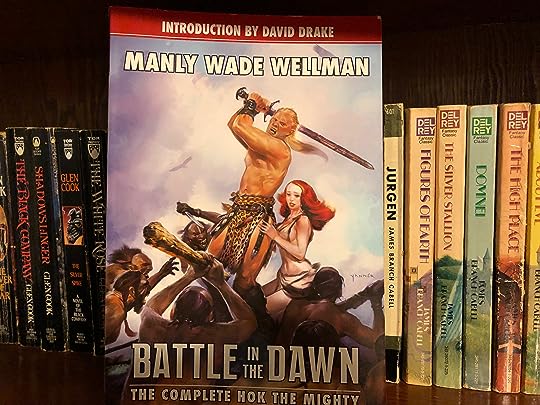 My series on Appendix N of the Dungeon Masters Guide nears its conclusion. Two more entries remain after this. This one presents a bit of a challenge for me. I come to praise Manly Wade Wellman, but I’m finding it difficult. Not Margaret St. Clair difficult. Far from it. But challenging.

Wellman is primarily known for his Silver John, or John the Balladeer stories. I’ve read several of those. Silver John is a highly educated hillbilly, an Appalachian folktale character roaming the countryside and involving himself with supernatural doings. He might have influenced the Bard player character class, though I have my doubts. I liked the stories somewhat, though they didn’t leave a strong impression. I much preferred his character John Thunstone though I’ve only read one of the novels. Thunstone seems to follow in the tradition of the Occult Detective character. He’s urbane, witty, and devious when needed. I’d be happy to read more of his doings and can unreservedly recommend at the very least “The School of Darkness.”

But I’m not writing today about Silver John or John Thunstone. Instead I’m writing about Hok the Mighty. I should enjoy “Battle in the Dawn: The Complete Hok the Mighty.”  I mean, look at that cover. There’s some Swords and Sorcery for you.

The problem is that the stories following that cover aren’t S&S. Hok the Mighty is a Cro-Magnon caveman. The stories are stone age adventure. Sorcery doesn’t enter into it (though of course Hok interprets certain phenomena as supernatural in origin.) Wellman is clearly interested in the subject matter. The stories are replete with firsts: the first kiss, the first bow, etc. All of these experienced or invented by the intrepid Hok. And the stories are densely footnoted, as Wellman explains the scientific evidence, research, or speculation behind particular details of the story. (It isn’t his fault that later research has since discredited some of these.)

The problem is that, following the first rather straightforward caveman tale, Wellman follows it with Hok encountering Atlantis. While this makes for a reasonably good story, it completely undermines Wellman’s project of presenting firsts. Having injected a sort of “deep time” concept, Hok’s discoveries are robbed of their novelty since the Atlanteans have necessarily discovered some or all of these long since.

Now, this touch of fantasy does lead the Hok stories into more — from my viewpoint — enjoyable territory. Wellman begins to toy with the idea of Hok as the prototype Hercules. Various of Hercules twelve labors appear. I personally think this would have been a more productive road to travel, with footnotes regarding the later mythological “retellings” of Hok’s exploits. These sort of Ur-myths could have branched out to other characters and, perhaps, Wellman could have indulged himself with a touch of the numinous, the unexplained, the outright supernatural. I’d have enjoyed that, I think.

Instead we get rather rote adventure stories, limited by paleolithic technologies, limited settings, limited scope. I understand that pulp-era adventure stories often rely upon coincidence and luck rather heavily and it is ungracious of me to complain about Wellman doing the same. But some of the stories of the era work better than others. In fact, I did quite enjoy the last complete story in “Battle in the Dawn.” Perhaps tellingly, it didn’t include Hok at all. It is, rather, an old fashioned science fiction tale. It hits all the notes you’d expect, but does it — in my opinion — much better than any of the Hok stories.

So, I’m reluctant to state that I can’t really recommend Hok the Mighty. Perhaps some of you might enjoy his tales. Your mileage, as they say, may vary. Gygax may well have liked him. If John the Balladeer did not inform the Bard class, perhaps Hok the Mighty suggested the Caveman entry in the Monster Manual. I couldn’t say; it’s the rankest speculation.

If my opinion carries any weight, go pick up a John Thunstone story. Leave Hok the Mighty in his cave. [UPDATE: Or even better, read the superlative Kardios of Atlantis stories]