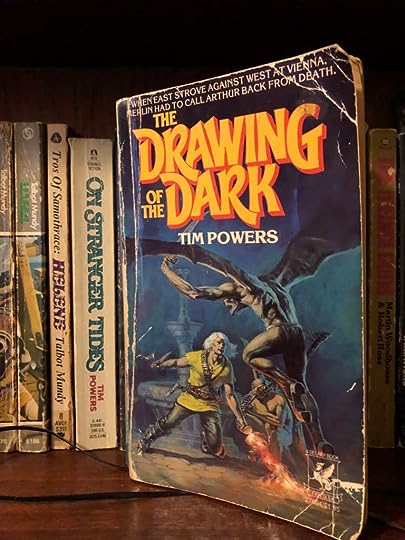 Why have I waited so long to read The Drawing of the Dark? Perhaps it was for the best. Tim Powers seems to have constructed a story drawing on interests and predilections that I have developed and nurtured over the years. Had I read it as a teen, for example, it wouldn’t have spoken to me so fully.

Powers wonderfully combines swordplay, Arthurian legend, history, Vikings, the Renaissance, a smorgasboard of myths, and — wait for it — beer, into a rousing, engaging tale of the defense of Western Civilization. Even the theme pushes my buttons. How could Mr. Powers have known? Does he possess a touch of Merlin’s precognitive abilities?  (Of course he wrote the book with me in mind. Stands to reason, doesn’t it?)

It is interesting to compare Dark to the work of another Tim, Tim Willocks. His The Religion concerns a similar historical subject. But whereas Willocks treats the story with rigorous accuracy and vivid, often gruesome, description, Powers adds fantasy, and even the occasional touch of whimsical humor. Both are excellent stories from two different approaches. Interestingly, from what I understand, Powers original intention was to set Dark during the Siege of Malta, as Willocks did, rather than Vienna. I’d have been intrigued to read each man’s depiction of that event.

I have been reading Powers for decades now, and am always impressed. His books stick with me. Even if the details fade, an overall impression remains. Drawing of the Dark, will, I am certain, stay with me.

And did I mention beer? I love that Powers made it an essential plot point of The Drawing of the Dark. (The title is a bit of an elaborate joke.) I like it when beer plays a strong part in a story. Glen Cook does this well with his Garrett novels. I think it can also play a part in world building. I tried to do something along those lines in Boss: Falchion’s Company Book One. (Book two, Captain, is now out in print and digital, with the audio edition currently in production.) Distinctive styles and additives can offer a fictional place an additional layer of verisimilitude, a greater sense of place. But I don’t recall anyone giving beer such a central role. Cheers, I say, Mr. Powers. Cheers.