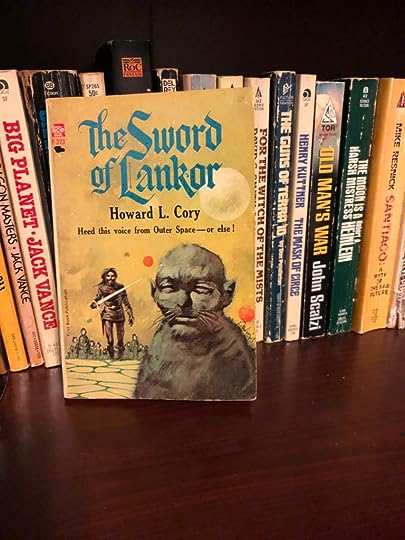 There was a time when bookstore shelves were not dominated by cinder block-sized fantasy epics. Back in the 1960s a 150-page sci-fi paperback was commonplace. Or, so I understand from my expeditions through used book stores. I’m afraid I have no memories from the 60s.

I see nothing wrong with short novels. Not every meal needs to be a seven-course feast. A salad and a half-sandwich lunch is sometimes precisely what you need. At other times you just want to go through the drive-through and get something fast and tasty, but not particularly nutritious.

That’s where The Sword of Lankor, by Howard L. Cory comes in. Lankor is a Burroughs-inspired adventure novel, set on a distant planet (Lankor) full of human or human-like creatures of varying skin colors, along with a variety of non-humans. The hero, Thuron of Ulmekoor, is your standard-issue sword swinging barbarian with a lust for — well, everything. Adventure, food, drink, women. Starting with, natch, a tavern-brawl, our hero finds himself involved in a tournament to see who is named the Son of the War God.

From there the story hits all the expected notes. And there’s nothing wrong with that. You want your drive-through meal to taste like you expect it to. There is a comfort in familiarity. There is a touch of Burroughs there, a bit of Williamson, a dash of Merritt. Some of it reminds me of Lin Carter’s The Higher Heresies of Oolimar, though of course it must be that Cory influenced Carter, given the publication dates.

Lankor isn’t strictly Sword-and-Sorcery, however. There is no sorcery. The “magic” sword is in fact alien technology. I’m giving away nothing here; the twist is telegraphed by the back-cover. But that was the standard back then. The strict demarcation between fantasy and science-fiction had yet to be (artificially) implemented. It reads like S&S, more than, say, Sword-and-Planet. Thuron of Ulmekoor blends comfortably with Brak the Barbarian or Kothar.

There was one problem that diminished my enjoyment of the novel, the shriveled, blackened onion ring mixed in with the french fries of my drive-through order, if you will. At one point, about three-quarters of the way through the story, Thuron loses his “magic” sword. Yet a couple of chapters later, it is conveniently at hand. Only to turn out to have actually been missing after all, as his retrieval of it is an important plot point. This is jarring. It explodes the willing suspension of disbelief, forces you to recall that, after all, this is only a story. Returning to the tale requires a deliberate act of goodwill on the reader’s part.

The erratically appearing and disappearing sword is, of course, merely an editing error. It slipped by, as these things do. I recall that when I was writing Karl Thorson and the Jade Dagger, I spent a great deal of time ensuring that all the tools and weapons Karl would need to fight and explore his way through his underground adventure were all accounted for, that all losses were noted and would not appear later. So, of course, it had to be pointed out to me by the editor that the villain’s jacket was handed off to his assistant in one chapter, and yet somehow he is wearing it later. I was a trifle embarrassed, and immediately fixed the continuity error. I do appreciate good editing. In this case it helped ensure that (in my biased opinion) Jade Dagger was an entertaining Semi-Autos-and-Sorcery adventure. (If you haven’t already, check it out. Still digital only, but I’m told the print edition is in the works.)

So, Lankor is not fine dining. It isn’t a meal you’ll recall fondly years later. But if what you’re after is a quick, mostly satisfying slice of cheap entertainment, Lankor just might be what you want to order.