Tales From The Magician’s Skull. Plus Savage Journal Entry 17. 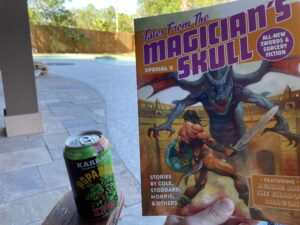 The delivery truck driver dropped off a box at my front door the other day. The box label read “Goodman Games.” Inside, protected by redundant layers of bubble wrap, were two copies of Tales From the Magician’s Skull Special 2. My author comp copies!

Since I have more reading to do, I’m just going to leave you with the next Savage Journal entry. After this word from our sponsor, me: “Buy Blood and Jade. You’ll like it.”

Something that really gets under my skin, dear diary, is creatures that just refuse to stay dead. Of similar rank on the ire and bile index are folks who by all rights should have been enjoying enforced retirement in the coffin condo centuries ago, yet who are still walking about in an extended pseudo life. Both reek of sorcery. It is unnatural and it makes my blood freeze.

I bring this up for a reason, dear diary. Bear with me. Haakon the fence proposed an intriguing burglary: a jewel encrusted golden crown interred with Rizak III in the crypts beneath the temple of the spider god, Rachos. Rizak kinged it for a short period some three hundred or so years back, a barbarian adventurer who briefly interrupted Bandahar’s status as an oligarchic republic. Makes my heart proud to hear of a barbarian swordsman done good. The temple was built over the burnt ruins of Rizak’s palace (his reign did not end pleasantly.) Haakon offered me a substantial sum for the acquisition of the crown, though, he temporized, “I may be forced, reluctantly, to tender a somewhat lessened figure, dependent upon, and corresponding to, the physical condition of said artifact.” I mentally cut his offer by two thirds. Haakon provides me a steady outlet for purloined merchandise, but he offers coppers on the gold piece, and always surrounds himself with enough bodyguards to prevent me from physically expressing my displeasure. Just before I leave Bandahar for parts unknown, I’m going to break into Haakon’s storehouse and rob him blind. I comfort myself with this thought each time that miser underpays.

So, I infiltrated the temple, made my way down into the crypts and located Rizak’s tomb. And, wouldn’t you know it, the crown was not left unguarded. A half dozen men who should have been decently crumbling to dust were instead shuffling towards me through inch thick layers of dust. Chilling. You know my position on the supernatural: I’m opposed. Still, as they were moving through the natural world, they should be subject to natural laws. I slid my broadsword free of its shagreen-bound scabbard and laid down the law. It was not a pleasant fight. Already long dead, they were not easily discouraged. My leg and arms were raked with skeletal talons, a skull covered with yellowed, parchment thin skin and wisps of hair clung by its teeth to my shoulder, even after I lopped it off the shambling body.

At last, after some pretty thorough dismembering, I made my way, oozing blood, back to Haakon’s place of business, deep in the Vista. (The Vista is the ironic Bandaharan moniker for the city’s most deplorable and hazardous slum – you see it boasts no view at all, being a maze of ramshackle structures continually wreathed in a smoky haze.) I handed over the sack containing the crown and accepted the paltry reward (because, as expected, “the item is more worn than anticipated, and this craftsmanship is positively second rate.”

The sack also contained – and I close with a smirk on my face because of it, dear diary – that tenacious skull, still gnashing its teeth and glaring fury through gleaming red, desiccated eyeballs.