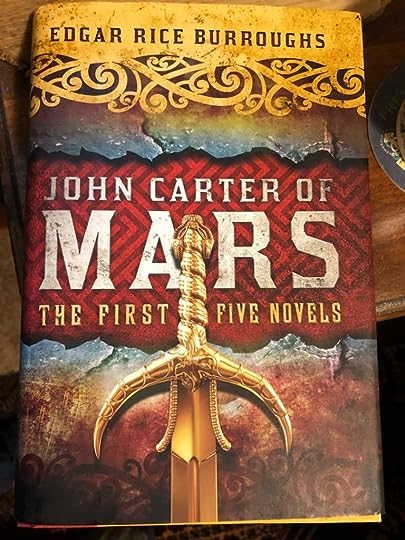 Does the Sword-and-Planet (also known as Planetary Romance) genre qualify as Sword-and-Sorcery? Or, more precisely, can it?

Wait, you want some sort of explanation rather than a blanket agreement or denial. Fine.

You might think that swapping out “sorcery” for “planet” would turn the story into science-fiction. But if you examine the sort of science that informs many Planetary Romance stories, you’ll discover that the science is sorcery wearing dark glasses and a false moustache. You’ve got ESP, telepathy, unexplained rays that accomplish this or that without even a semblance of a scientific foundation.

These aren’t hard sci-fi tales, nor do they pretend to be. The granddaddy of them all has the protagonist waking up on Mars. The “science” comes and goes as the narrative demands. Radium bullets that never miss disappear as a plot element when it would become inconvenient. Characters seem to forget they possess telepathy. Hardly scientific. The Chessmen of Mars could easily be reworked as a Conan novella.

Leigh Brackett’s Eric John Stark books constantly find the space-farer on backwards, low-tech planets. Mental powers of aliens or mutated humans lead to such lines as “‘You have strong magic,’ said the mercenary, trotting by his stirrup. ‘But from now on you are hunted men.’” Her Sword of Rhiannon is barely a step removed from fantasy.

C.L. Moore’s Northwest Smith stories are Lovecraftian horror/adventure tales. If you’re tapping into the bloodline of the original big three, you know you’re going to get at least trace elements of S&S.

Now, just because some S&P can qualify as S&S, it doesn’t necessarily follow that all S&P does. If you remove or muddy the “science = sorcery” equation, then the precondition for qualification disappears. Take, for instance, Under Strange Suns. Yes, I’m using one of my own as an example. It’s my web log. I wrote USS as an homage to ERB’s Barsoom novels. But I wanted to at least create the illusion of scientifically plausible grounds for travel to another world and the events that transpire. By doing so I eliminated the sorcerous component. Which is why, I suppose, that the book is accompanied by such keywords as “Space Fleet” and “First Contact.” (NB, I have written S&S, including a number of short stories and a couple of novels. Happy to direct you to them. But I don’t consider that USS qualifies as such.)

Or, for a more prestigious example, there is Jack Vance’s Planet of Adventure series. The tech-level our hero faces varies, from the primitive to the space-faring. But, even at the lowest level, the science remains grounded, and never appears to be supernatural. Poul Anderson’s lark The High Crusade is another example. In this case, of course, it is the humans who are the backwards, sword-wielders who end up on technologically advanced planets. But the science, while hand-waved, is treated seriously and not as an analog of magic. So, by my terms, while it might be S&P, it isn’t S&S.

So, in summary, some S&P can be considered S&S, but not all. Questions? Comments? Complete dismantlement of my premise?

PrevPreviousTales From The Magician’s Skull. Plus Savage Journal Entry 17.
NextDancing on the Precipice. Resurrected Post.Next