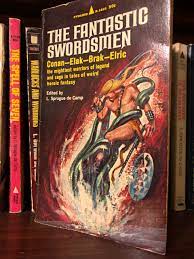 The Fantastic Swordsmen is the third entry in L. Sprague de Camp’s swords-and-sorcery anthology series. De Camp’s introduction is solid, but after a few of these apologias for S&S they all begin to read much the same. Don’t worry, the stories are better.

Black Lotus. Robert Bloch. Bloch wrote this story at the age of sixteen. It is that sort of information that makes me want to snap my pen in two and toss my computer out the window. (The Defenestration of the ChromeBook. No, not catchy.) Black Lotus is a compact (as compact as the requisite purple prose allows) fusion of horror and the Oriental Tale. The Oriental Tale, still popular in the pulps of the 1930s is a remnant of the centuries-old fad begun with the first European translations of 1,001 Nights. Bloch serves up a good story. A remarkable story considering the age of its author. The disparate elements of the tale resonate on the individual frequencies of Lovecraft, Howard, and Smith. If you’re going to imitate…

The Fortress Unvanquishable Save for Sacnoth. Lord Dunsany. This exquisite narrative reads like the missing literary link between Amadis of Gaul and Conan of Cimmeria. What more is there to say? It is Dunsany. Either he charms you or he doesn’t. His enchanted pen seldom fails to ensorcel me. I mean, look at that line I just wrote. Absurd, I know. But I don’t withdraw it.

Drums of Tombalku. Robert E. Howard and L. Sprague de Camp. A firecracker of an adventure tale. The two halves of the story (the first half drafted by Howard and the second half written by de Camp from Howard’s outline) mesh up well. I do feel a lack of resolution, and some plot elements are left hanging. Still, I liked the story. It is atmospheric, colorful, and contains plenty of action. I’ll take it.

The Girl in the Gem. John Jakes.  This is TV dinner Brak the Barbarian: a complete meal in a conveniently sized, quickly consumed package. Jakes wastes no words, gets things moving quickly, and doesn’t let up. He provides backstory when you need it, otherwise he focuses on driving the plot. A fine, one-beer yarn.

Dragon Moon. Henry Kuttner. Elak stories seem to consist of variations of the same collection of elements. Stir and serve. That’s all right, though it can make it hard to distinguish one from the other. The issue I have with Elak stories is that they contain too much for shorter form fiction. The events are not given space to breathe, to be fully explicated and integrated into a believable secondary-world. Thus the tales come across as sketchy, slapdash. Compressed epics. Still it is fun to see Elak buckle the swash and Lycon swill the booze.

The Other Gods. H. P. Lovecraft. Hubris. And beyond hubris…terror. Yep, HPL. It’s good. Read it.

The Singing Citadel. Michael Moorcock. Elric is back for some emoting, some pondering of his navel, and the usual summoning of conveniently reached elemental beast lords, not to mention Chaos Lords, who all arrive dramatically at the last moment to save Elric’s bacon in this psychedelic S&S story. I enjoyed it well enough. I’ve learned to calibrate my expectations, setting the dial to the position marked “Moorcock.” This one has its moments, but too much of it is like being trapped inside a lava lamp surrounded by strobing, multi-colored lights while someone reads beat poetry. If this is within your wheelhouse, congratulations. My preference is for a more grounded adventure story. So take my criticism for what it’s worth. Individual tastes differ. Middling Elric is my estimation. Probably not a derogatory description, no matter your opinion of the corpus.

The Tower. Luigi de Pascalis. The anthology ends on a somewhat experimental note for de Camp. Maybe he wanted to include it since he went to the trouble of translating the story from the original Italian. This is a taut, atmospheric horror/psycho drama with the trappings of S&S by way of the chanson de geste. Intriguing and worthwhile, if not fully engaging.

Verdict? Buy it. In one volume you get Dunsany, Howard, and Lovecraft; Kuttner and Moorcock; de Camp wearing multiple hats, and an introduction to someone from a bit off the beaten path.If you haven’t been introduced to my work, I welcome you to check it out. I noted a new Amazon review for one of my novels. I’ve read that the Amazon algorithms kick into a higher marketing gear after 50 reviews. Under Strange Suns is getting tantalizingly close. If you’re interested in reading about an ex-special forces soldier’s search for the missing inventor of the FTL-drive, with a nod here and there to ERB, this might be the book for you. If you decide to give it a look, please leave a review. I’d like to get over that hump and see what’s on the other side.