There was a time when bookshops were the domain primarily of discrete novels, or perhaps a sequel or two. Complete, single-volume stories sat at the apex of the bookstore ecosystem in the epoch before multi-volume epics ruled the shelves. But, for good or ill, their time has passed, their dominance supplanted by the era of the series. Perhaps you want to investigate some of these great beasts, get to know them, yet are leery of undertaking the effort. I understand the trepidation. There is a substantial time investment involved in such exploration. You can’t just read one book: the story would be incomplete. So, where should you start? Well, I’ve wandered with some of these vast herdbeasts, dwelt amongst them. Enough to be averse to doing so in the future when stand-alone volumes can provide me a story with a beginning, middle, and end. But I also understand the Jane Goodall-esque reward that can come with lengthy immersion. Accordingly, I’m here with some recommendations, my selection for the five best fantasy series.

These recommendations are entirely subjective. Other opinions may — and will — differ. That’s fine. I wouldn’t expect anything different. So, here they are, presented (other than the first) in no particular order. 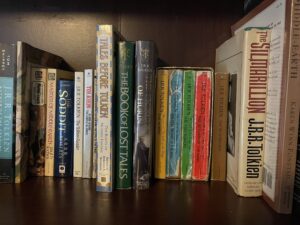 The Lord of the Rings. But Ken, you say, LOTR was written as a single book, not a series. To which I reply, a fine pedantic point, that I will ignore since the books were actually published as a series, instigated the trilogy trend, and began the Tolkien craze that led to the domination of series fiction. I doubt you need me to sell you on this one. Even if you haven’t read it, you’ve certainly heard of it. The reputation is deserved. LOTR is the granddaddy of them all, immersive, moving, engrossing, and fulfilling. There is a reason people re-read it over and over.

Malazan Book of the Fallen. Steven Erikson created a masterpiece with this series. The chronological depth rivals Tolkien’s legendarium, though Erikson doesn’t go all the way back to the creation of the universe. In sheer length, of course, it surpasses LOTR. But that is the selling point of these epics: they are long. You get to spend a lot of time with the stories, with the characters, with the world the authors are creating. Erikson’s ability to generate memorable characters is impressive. He gives us any number of fantastically realized soldiers (influenced, no doubt, by Glen Cook. See below.) His background in archaeology and anthropology is put to good use. (Regretfully, his unfamiliarity with economics also comes through, but that’s a quibble.) His ability to juggle dozens of narratives and have them all converge at the end of ten books is impressive. Any one of these narratives would provide for an epic story. Yet here we get a saga comprising all of them. He can by turns make you belly laugh or engender loss. Good stuff. 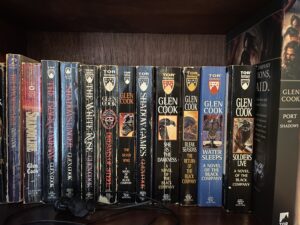 The Black Company. Glen Cook’s seminal series influenced the development of the Grimdark style. While not initially conceived of as a series, Cook managed to turn it into a single, decades-spanning epic of a long-lived mercenary company seeking to recover its past and return to its point of origin. He gives us as protagonists the men usually considered the bad guys: the soldiers fighting for the evil empire are the main characters, rather than the scrappy rebels. It is a deeply cynical book, focused on base emotions, why men fight, why they are willing to fight for and die for each other rather than a cause. The world Cook builds is bleak, without much light. Magic is scarce, but deadly. Life is cheap, wars are devastating. But with the character of Croaker, Cook gives us one of the great narrators of fantasy. And you feel viscerally the fate of each of the soldiers of the Black Company. The final books, the Books of the South, can drag a bit. But the resolution of Croaker’s story is worth the journey.

Now Cook has been prolific. So why choose The Black Company? Why not The Garrett Files? I love those books. But the Garrett Files doesn’t count, doesn’t meet the definition of a fantasy series. Nor do the Elric books, nor Fafhrd and Gray Mouser, nor Conan, etc. These are ongoing series, connected tales instead of single, intentionally completed, long story. What about A Song of Ice and Fire? Not finished, so I can’t evaluate it. If it isn’t finished, it isn’t a series, and thus doesn’t qualify. Same with the Steven Brust’s Vlad Taltos books, or Jim Butchter’s Dresden Files, both of which I’d otherwise consider in the running.

The Chronicles of Amber. Roger Zelazny’s series is intriguing from page one. There is a touch of noir about it, great action, grand revelations, treachery, dynastic family intrigue, and unending creativity in the world building. The Amber family is one of fantasy fictions’ great creations. The notion of one true universe, from which all others derive, is cool. But what is better is the concept of unique individuals able to move through the universes, manipulating and shaping them is even cooler. And Corwin Amber is one of the coolest protagonists ever written.

We shall pretend the second series does not exist, thank you very much. 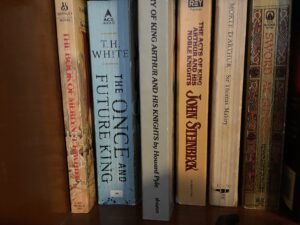 The Once and Future King. If you want to read something that allows a certain literary pretension, but don’t feel up to the baroque psychodrama of the Gormenghast Trilogy, pick up T.H. White’s masterpiece. Not exactly a rehash of Thomas Mallory, The Once and Future King still follows the same general path through the Arthurian legends, so you’re in familiar territory. But White’s take is a deep dive into human psychology and sociology. It is often funny and often tragic. So, much like life. Except with Merlin and talking animals.

And there you go. Others will provide you a different list, some pointing you to Robert Jordan’s Wheel of Time, some insisting upon the supremacy of Brandon Sanderson. Some deluded soul might even suggest Falchion’s Company (available in print, digital, and audiobook formats — just saying.) But this is my web log, so the above five are what you get here.

Now, for those still interested, below is the third entry in Magnus Stoneslayer’s diary.

Dear diary, today I spent the late afternoon cleaning myself of gore. Again. The blood splatter absorbed from some of the donnybrooks I’m constantly embroiled in is — let us say — messy. When forced to serious infighting then we’re talking oleaginous bits of intestine, in addition to the sticky red life fluid. And it’s best not to consider the contents of said bits of intestine. So, you’ve got your arterial spray, and your squishy bits from the inside of a torso suddenly emerging into the light of day at high speed, and it just gets everywhere. This wild barbaric mane of mine that women love to run their fingers through gets unbelievably clotted. I can nearly peel off like a mask the matter slopped across my face. And the armor, well here I am once again discussing scrubbing the armor. I mean it is worthwhile, but the hours! It is enough to make an itinerant barbarian warrior post an ad for a valet.

Of course these chaotic melees seldom transpire near a conveniently located body of water. The few scraps of my opponents’ garments left unstained by brain matter or flecks of lung tissue or whatnot serve to wipe clean some of the worst of the viscera besmearing me, but

never all. It would be such a pleasant change of pace to someday slaughter a foeman who happened to carry a towel in his kit.

No, like today, I usually resort to handfuls of grass and the abrasive action of clumps

of dry earth. Still, the sheer atavistic pleasure of combat rushing through my veins really does make it all even out. I don’t want you to think I’m complaining, dear diary. Braving odds that would make a civilized man blanch and soil himself is the meat, spice, and postprandial snifter of brandy of life.

I will not forget that so long as I remain yours truly, dear diary.

PrevPreviousLake Tahoe. Resurrected Post.
NextHow Does Post-Apocalyptic Fiction Tie in to Sword and Sorcery? Plus Savage Journal Entry 4.Next