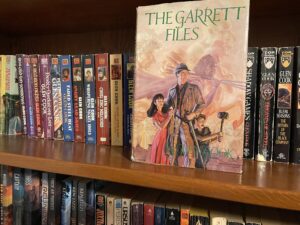 Rereading LOTR engenders a warm, comforting contentment. Rereading Garrett offers a sense of rightness, of completion. One is coming home, the other is going to the pub. Each appeals.

The Garrett books were…influential. I won’t say foundational, since I didn’t start reading them until college. But once I started I didn’t look back, picking up each subsequent volume, and indulging in frequent rereads. I think I’m on my third copy of the omnibus containing the first three novels. I kept loaning them out to girlfriends and didn’t always get them returned. Looking back, I don’t think I shared the volume as a test. It wasn’t a question of “If you don’t like this we aren’t compatible.” It was more a shortcut to offering her a glimpse of me, as I saw myself through a flattering funhouse mirror.

Sweet Silver Blues. I can’t recall the number of times I’ve read this. It doesn’t matter. It works every time. SSB is a polished gem of a book. It hits all the right notes. I read it first shortly after its publication, before I’d begun my Rex Stout studies under the tutelage of Archie Goodwin and headmaster Nero Wolfe. That didn’t matter then. Understanding the influences, homages, and winks and nods only increases my appreciation. As a youngster I had a passing familiarity with Chandler and Hammett. Over the years I added Stout and MacDonald. I realize there are still gaps, that I’ll miss some of the references in the Garrett books. It still doesn’t matter.

SSB introduces us to the major players in the series: Garrett (natch), Morley Dotes, the Dead Man, Saucerhead Tharpe, Tinnie Tate, and a few bit players. It gives us our first glimpse of the stage: TunFaire, before taking us out for what is a rare trip beyond the confines of Garrett’s urban milieu. And we get a bangup yarn, complete with sleuthing, travel, loads of humor, and a great set-piece assault that, due to Glen Cook’s economical, almost Hemingway-esque minimalism, shouldn’t work as well as it does, yet succeeds in rousing every time. As a crowning touch, Cook manages to imbue the tale with a touching warmth at precisely the right times.

Bitter Gold Hearts. Follows some of the beats from the first one, but isn’t a rehash. Though Morley Dotes somewhat echoes his role as ally with his own agenda. A recurrent theme, at least in the first three books. Cook delves even further into the ugly underbelly of civilization. The scene with Saucerhead at the Bledsoe gets me every time, as touching as the Kayean Kronk and the young Marine bit from SSB.

Cook shows his ability to convolute, pitch the red herrings, and obfuscate. But he never cheats. All the clues are duly planted. In due time.

We get an appreciation for Garrett’s attitudes toward arbitrary authority and unearned power. We learn that his cynicism is, perhaps, well founded. And we are introduced to an important player, Chodo Contague, the kingpin of the TunFaire underworld, as well as two of his henchmen, the icily brutal Crask and Sadler.

Cold Copper Tears. There is a line in this book I quoted for decades: “My favorite sport is female and my favorite food is beer.” Marriage has since curbed my sporting appetites.

The physical description of Garrett gave me pause this time. I’ve seldom really seen him as a ginger. Given that, his appearance is, I believe, supposed to be more reminiscent of Travis McGee than Archie Goodwin. There is certainly no hint of Sam Spade. (Sadly, I can’t remember what Philip Marlow was supposed to look like.)

My surprise here is justified; on the very first page of the very next book, Garrett states he has brown hair. So, go figure.

Cook telegraphs the general grounding of the book a bit too early, but perhaps that’s only noticeable on a re-read. And Cook does have to get the plot going at some point.

This book is dark. That underbelly of civilization gets even uglier. Cook gives serious consideration to the damage done to children by poverty, neglect, and general human malignancy. Garrett’s friendship with Morley, while useful, does morally compromise Garrett. He may assuage his conscience by the fact that he’s not the one cutting throats, but those throats would have remained unscathed if he hadn’t invited Morley Dotes along. Adds a dimension to the character and, for a thinking reader, invites introspection: Is the reader vicariously compromised as well if he condones the action? There is a lot going on in these light, humorous American detective story homages of Cook’s.

We get a better appreciation of the scope of TunFaire, visiting the DreamQuarter, the Tenderloin, and more. Garrett wears down a lot of shoe leather in this one.

In the final (?) book of the series, Garrett takes what appeared to be a sharp, uncharacteristic turn in his personal life. Keeping that in mind, I’m observing Tinnie Tates actions more closely this time, reading past the flippancy to the fictional reality that narrative style obscures. I’m beginning to suspect that the sharp turn I objected to might well turn out to be utterly reasonable and foreseeable to those who read more closely and considered the Tinnie Tate blow ups, rows, and flares of temper to be warning signs.

CCT remains a good read. I get more of the sense that Cook is settling in for the long haul, planting more seeds he intends to harvest in later books.

So, for those who haven’t yet visited TunFaire, I recommend it. Or, if you are perhaps interested in a standalone novel first, before diving into a series, how about Reunion? Or Under Strange Suns? Or perhaps even Thick As Thieves. 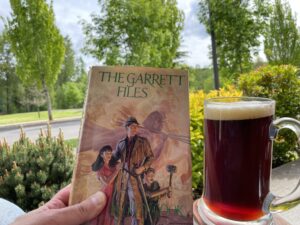