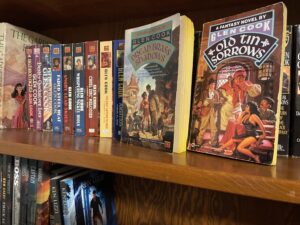 Let’s continue reviewing the Garrett Files series, shall we?

If you’ve jumped into the Garrett novels after Old Tin Sorrows, you might be wondering about the painting hanging on the wall in Garrett’s office. OTS provides the story behind it.

Cook deviates from his standard formula here, taking us just beyond the city walls of TunFaire and leaving out much of the usual supporting cast. OTS adds elements of an Agatha Christie-style mystery (“Ten Little Indians” anyone?) to the American hard boiled detective story, setting the action in a grand manor house, complete with butler, various household servants, and questions about inheritance of the Stantnor family fortune. Cook also adds a significant measure of Gothic horror, slathering on the atmospherics and peppering his descriptions with variations of the words “ghost” and “haunted.”

Detective tales always traffic in the darkness of humanity. Garrett stories often do so wholesale. In this case the evil is focused, localized. As usual, Cook manages to make Garrett’s involvement poignant. The humor is there, but it’s relatively muted in this one. Garrett comes out of this one looking somewhat tarnished. Had he been able to confer with the Dead Man…Well, that would have been another story.

This one is muddy. The instigating incident occurs early. (And the little twist is there, shining like brass for the sharp-eyed reader, though even the Dead Man misses it.) The middle of the novel sort of sits and churns, without much seeming to happen, though we get an idea at the end how much was really going on behind the scenes. Winger gets added to the cast, one of my least favorite characters in the series. The MacGuffin of the story and certain characters suggested as vital to the plot don’t get much page time until the very end.

Story wise, this is a lesser entry. But I don’t care. I get to spend more time in TunFaire, as seen through Garrett’s eyes; hang out with the Dead Man and Dean, Tinnie Tate, Morley Dotes and Saucerhead Tharpe. The mystery — such as it is— is merely an excuse.

An aside: I don’t know if Cook intended this, but there is a hint of Red Harvest in this one, though with Morley Dotes as the Continental Op.

In a sense, DBS eases us into a transition in the series. Things are happening in TunFaire. Glory Mooncalled is stirring the pot. Change is occurring, with more in the offing. And that change includes the Kingpin.

Glen Cook and the Garrett novels influenced my own writing. It is possible you might see hints of Garrett in Karl Thorson, should you read my Semi-Autos and Sorcery novels. Which you should. Here’s a link to the first one. I think you’ll enjoy it.