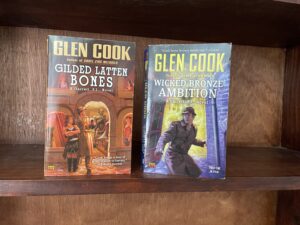 And so we reach the end. Is it wrong that I already want to start over at the beginning? Anyway, here are my thoughts on the final two books of Glen Cook’s Garrett Files.

This book is a seachange. Foreshadowed in Cruel Zinc Melodies, significant changes play out in Garrett’s life. We’re thrown into change from page one, finding Garrett living with Tinnie Tate — away from his house with the Dead Man, Dean, and Singe, who are all carrying on without him. The chronology is foggy, but it might be a couple of years from the end of CZM. Garrett feels he’s losing his edge, becoming a drone. Worse, the hints of Tinnie’s behavior — the attitudes that Garrett has dismissed in a sort of humorous “Lucy, you’ve got some ‘splaing to do” fashion — have elevated, increasing in intensity toward a breaking point.

Morley Dotes getting himself nearly killed causes the break, as Garrett naturally rushes off to attend to his best friend despite Tinnie’s obdurate, indignant objections.

Considerations regarding major life changes weave in and out of a plot that is somewhat reminiscent of the Rex Stout tales in which Archie Goodwin fumes and twidles his thumbs inside the brownstone while Nero Wolfe oversees the rest of the troops out in the field, doing what Goodwin feels he should be doing himself.

Furious Tide of Light returns. Significantly. Most of the rest of the cast appear (absent Winger, who appears mostly off stage, as part of the life changes theme, featuring in another character’s development) Morley Dotes and Belinda Contague have established a romance. Playmate is suffering from cancer. Saucerhead is getting gray and putting on weight. Dean has grown increasingly rickety. Garrett himself feels pudgy, out of condition — both mentally and physically. After the prior book dealing with growing up, this one touches on aging. Indeed, by the time the plot unravels, aging is more than touched on, it is pivotal.

In all an excellent book, if one is willing to accept time and change in long running series fiction (whether detective novels or super hero comic books.) A disappointment if one is committed to the status quo. I liked it quite a bit this time around, more than the first read through over a decade ago. So, I may be coming around to accepting change in my series fiction. After all, John Watson got married and moved out of the Baker Street apartment.

And so it ends. Perhaps. The length of Wicked Bronze Ambition does make one suspect an extended encore. I got a sense of self-indulgence, of playfulness. Of deliberately placing easter eggs: Father Hunt; Black Orchid. Rex Stout titles salted through the book.

I found it a little overstuffed and (apparently like Garrett interminably throughout) a bit unfocused. Garrett being lost in his own head — the accustomed reveries from the previous books and from the stories of which the series is an homage — seem to have become extended, real time dissociative episodes. His various companions must snap him out of it. Garrett wonders why this is happening, but it never gets resolved. Either Glen Cook is playing around, considering how much time would actually be consumed in pondering the paragraph or two that narrators seem to manage in an eyeblink. Or it is linked to the theme of aging, carried over from the previous book. Garrett seems to have put on a decade or two in the last year, feeling slow and creaking in his joints. Could just be an authorial projection.

Garrett spent what I thought an inordinate amount of thought remembering his brother Mikey, whom he barely mentioned at all in the previous novels. But Cook comes through, paying it off at the end. Though it felt extraneous to the plot. I wonder if Cook was dealing with the death of a pet when he wrote this.

The plot itself is muddled. Even when explained at the end it doesn’t make a great deal of sense. But that’s magic for you. There is great latitude for hand waving.

I don’t know if Cook considered this Garrett’s swan song. He certainly dropped enough hints that Garrett might wrap it up, that he could take an early retirement. Hard to say, since the book ended abruptly, as if Cook had run up against a maximum word count. But if that was the last novel it felt rather unsatisfying. Too much was left unresolved. We got no farewell from the Dead Man. Morley Dotes and Belinda Contague’s relationship is left unsettled. The Tinnie Tate matter seems to have been swept under a rug, though I suppose we got enough in the last book for closure.

My guess is that Cook did not intend this to be the last one, leaving the series open for continuation if sales warranted. I’m just guessing, but I think he would have tied up some more loose ends had he truly meant WBA to be Garrett’s curtain call.

So, do I approve of Garrett growing, changing, and aging? Or do I prefer the characters to remain in a perpetual stasis, with only minor movement within a book for narrative purposes, only to essentially reset in the next? As with most things, it depends. For relatively short series, such as the Garrett Files, I appreciate the decision to nod toward realism, to let the characters deal with aging and changing circumstances. For longer running series, such as the Nero Wolfe books, I prefer the artificial stasis, the agreement with the audience to ignore the impossibilities and implausibilities of characters seeming immune to the passage of time, ignoring that they are the same age in the 1930s as the 1960s; that all their adventures have occurred somehow.

Still, long live Garrett. I don’t think WBA holds up particularly well in comparison to most of the other books in the series. Yet if Cook produces another, I’ll be first in line at the bookstore.

While we’re waiting, why not try one of my books?