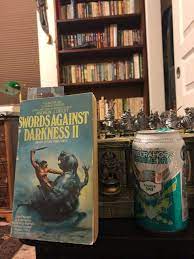 My faulty memory assured me that I had read Abraham Merritt’s The Moon Pool. So I picked up a copy figuring I would enjoy a re-read. While it is possible that I did read it during some lost year of my long and dubious past, I consider it unlikely now. How could I have forgotten such a vividly colorful, wild book as this? It will sit in good company next to my copies of The Dweller in the Mirage and The Ship of Ishtar.

Merritt was a writer of singular talent. He could paint in glorious images. In fact, while reading the book I kept wondering what a skilled comic book artist would do with an adaptation. Some visual genius along the lines of Moebius, aided by a skilled colorist. Colors are indispensable in The Moon Pool and Merritt describes them with lush, evocative phrases. I’d like to actually see some of the settings and creatures, as visualized by talented artists. I’ve seen them in my own mental theater, and those images were impressive, thanks to Merritt’s descriptive powers. But I’d still like to see artists’ interpretations, beyond the takes of the various cover artists.

We’re set up in this book to expect a sort of Lost World story set in the South Pacific. We get an opening featuring a tale within a tale framing sequence that is rather familiar to readers of Edgar Rice Burroughs. But then the story takes a more serious, horrific turn and we’re taken on a more bizarre journey than we might be prepared for if still anticipating a story of people cut off from the rest of the planet. Merritt allowed his imagination free rein.

I was struck by the almost allegorical nature of Merritt’s Biblical allusions. The Silent Ones are a trinity. Salvation is found in a voluntary sacrificial act, the essence of which is true love. The very name of The Shining One is Luciferian, and its nature as a fallen being, created and loved by the Silent Ones would be too on the nose in the hands of a lesser writer.

It remains amazing how enjoyably much of this old science fiction holds up. I think that is up to the aspect of suspense and adventure the writers were able to craft, as well a good old fashioned sense of wonder. The science itself is badly dated. Merritt was still writing about the ether. The theory of the creation of the moon was still in an uncertain infancy. And no one had yet proposed the theory of continental drift nor knew of tectonic plates. All for the best: there’d have been no story to tell otherwise.

The first person narration works well. I think the style works to introduce the reader to wonders simultaneously with the narrator experiencing them. Merritt does this masterfully. I gave it a try in my first novel, Reunion, which is still available from Twilight Times Books if you want to see if I managed to pull it off. Also, if you haven’t already, you ought to read The Moon Pool.