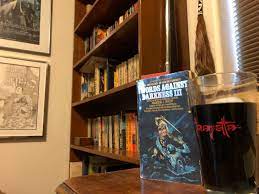 In the last entry in this series of reviews of anthologies, I covered Swords Against Darkness I. This time I’m leaping ahead to Swords Against Darkness III, because it is on my shelves. (I’ve since secured a copy of volume II and I’m eagerly looking forward to opening its pages.) The first volume offered up nine stories. This one ramps up to fourteen, plus a bonus essay. There is such a thing as over-egging the pudding. Not all of these stories were quite ready to step into the limelight. Given the sheer number of tales, I’ve trimmed back some of my commentary.

After the usual buoyant foreword from Anrew Offutt, we pick up where w left off, with Ramsey Campbell. I was less than complimentary about The Sustenance of Hoak, a rather grim tale of a town with a secret, a town planted in a colorless, featureless setting. The Pit of Wings is another yarn set in a town with a secret, and our hero, Ryre, is back to uncover it. Poor bastard. This one is almost as colorless as Hoak. But it moves a bit faster, becoming essentially a weird tale of the old school variety, though rather less well executed. It is…fine. It feels rushed, like a first draft turned in to meet a deadline. But, fine.

Richard Tierney returns with The Sword of Spartacus, the origin story of Simon Magus. Nor surprisingly, Simon is not yet possessed of much of a personality. But what a story! And, damn, what no-holds barred conclusion. I don’t want to spoil this one. Read it.

Up next is Servitude, by Wayne Hooks, a preliminary sketch of a work, teasing the reader with a depth and backstory that never emerges. My guess is that Hooks was an admirer of MIchael Moorcock. Though he manages to match the skeletal nature of Moorcock’s fiction, his style is less purple, more prosaic. That would have worked well had he filled out the tale with more detail instead of mere hints. It is not bad though. It reaches a darkly appropriate end.

David C. Smith follows with Descales’ Skull. Following the maxim that if you don’t have anything nice to say…Moving along. (In fairness, it is clear this is an early effort. Though why Offutt deemed it up to professional standards escapes me.)

I was happy to read the next one, In the Balance, by Tanith Lee. This is a short, well-executed fable. I liked it, though had I written it, I might have gone for a darker, more cynical twist at the end. I’ve not read much Tanith Lee. If I decide to remedy that lack, any suggestions as to where to start? Or if I even should?

Tower of Darkness follows, by David Madison. The characters, though initially unlikeable, develop some depth. The sketchy worldbuilding provides a sufficiently sturdy structure. It holds up, and Tower of Darkness becomes a reasonably engaging story, despite a certain simplicity and obvious trajectory. Nothing wrong with the familiar and hackneyed if it is done well.

David Drake returns to SAD with The Mantichore. Wit against necromancy; against brawn, and against ancient evil. A nice compact yarn. I do rather miss Vettius, however. Still, Dama will do.

Next: Revenant, by Kathleen Resch. A poem. Already a tough sell. A vampire poem. I’m out.

John DeCles offers Rite of Kings for the next entry. The lame, tortured prose of the introductory paragraph lost me. I tried to give it a chance. Once I recognized it for a S&S fairytale or fable, I feared for the worst. That sort of tale is hard to pull off if you are not Lord Dunsany. Sadly, despite a few decent passages, DeClas proved to be no Dunsany. Man, I hate to be so negative so far. Who am I, after all, to offer criticism?

Next is The Mating Web, by Robert Vardeman. A boy and his spider. Krek is the anti-Shelob, with a touch of Marvin the Robot and the merest hint of Bilbo Baggins. This is a fun bit of fluff with just enough action to balance the light humor.

Offutt brings out the heavy guns next with Manley Wade Wellman and The Guest of Dzinganji. It is good to see Kardios again. I understand Kardios. He is a man who wants only freedom, to keep moving on under his own terms. A hobo, in other contexts than these. This is clean, well-drawn, old school adventure in which we encounter an old, familiar monster in a somewhat novel guise. Enjoyable.

Next up is The Hag, by Darrell Schweitzer. The chanson de geste meets swords and sorcery, and they go on a first date to a horror movie. Well done.

Geo. W. Proctor is back with A Kingdom Won. We’re revisiting Nalcon, from SAD volume I. As with the Simon Magus yarn, this is a bit of an origin story. I liked The Smile of Oisia from volume one well enough. Sadly, this one didn’t do much for me. It reads like a fantasy novel compressed into a short. The set up and pay off involve so much backstory that it reads as sketchy. And the backstory we are given is rather hard to swallow. Perhaps the room for worldbuilding allowed by a novel would give this hokum space to breath, grow on the reader organically. Here, in this format, it didn’t work for me, becoming in the end merely a competently told fish story.

Last story up is M.A. Washil with Swordslinger. This is a meditation on age and aging, a grim reminder that there is always someone better. It is a requiem for a sword brother. Most importantly, the story is steeped in classic S&S style. It feels right. Good stuff.

Finally we have Poul Anderson with his essay On Thud and Blunder. Essential reading.

Taken as a whole, the positives outweigh the negatives. But this anthology would have benefited from pruning some of the branches. It doesn’t seem to me that SAD was an appropriate venue for introducing so many new writers. Still, it is nice to see that Andrew Offutt was so willing to provide the opportunity.

Meanwhile, I’m still working on creating my own opportunities. Pretend I’m shouting now, in a carnival barker’s voice. If you like sword and sorcery, here’s a crime/S&S mashup. Or, you can find a trilogy here, here, and here. Or perhaps you’d like some science fiction, or post-apoalyptic adventure. Okay, enough shouting. I want to get to reading SAD volume II.