The State of the Web Log. Plus A Trip To Nashville 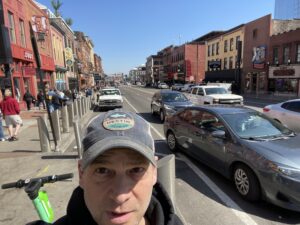 The state of the web log is…unfortunate. I tried to post last week only to discover that my entire website had gone missing. With the assistance of a helpful freelance IT specialist from Bangladesh I was able to recover enough that at least the place is functional, though poorly furnished. Of over 400 posts, only a few remain.

Still, no use crying over ephemera, right? So, below is what I’d prepared for you last week.

It turns out I could use a bit now and then. I wish to thank the cup of coffee beside me for its good offices.

I took a red eye flight out of PDX. With a window seat I was able to get a few minutes here and there of what might charitably be termed “sleep.” The transfer in Chicago was delayed for a couple of hours. But by late in the morning (not that late for someone coming from a couple of time zones over) I got to Nashville. I had a bit of time before I needed to be in Lebanon, the location of ConFinement III, and decided to take a look at the sights and grab a bite to eat. 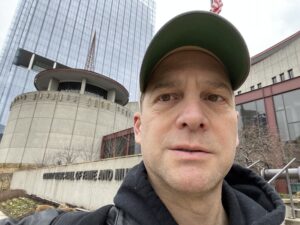 I wandered a bit, then found my way to Yee-Haw Brewing for a taco and a few beer samples. $15 for a flight of four is steep. But the place is in the heart of the Nashville convention zone, so naturally the prices must be adjusted accordingly. How was the beer, you ask?

Dunkel. Simple, malty. Could be a bit breadier and less sweet, but fine.

Vanilla Porter. Vanilla comes on late but strong. Same overly sweet body as the Dunkel. Had better examples of the style.

Peanut Butter Stout. Come on, I had to. Smells like a freshly opened jar. And that isn’t misleading. Surprisingly, I liked it as a stunt/desert beer. Wouldn’t buy a sixer, though. 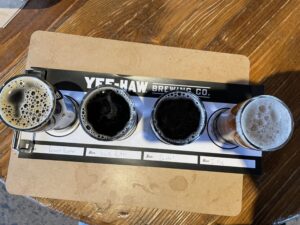 Twenty minutes after lunch I was at the con, confirming which panels I was signed up for. It has been over two years since I attended a con. This one is geared primarily as a writer’s con. The atmosphere of a fantasy/sf con, however, remains the same, whether it is a general fandom con or one more focused on craft. 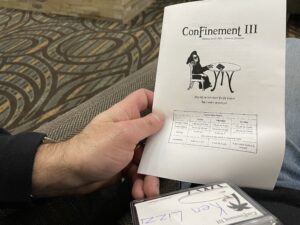 I met some people in person that I’ve only been acquainted with via social media. I sold a few books, sat on a couple of panels and then switched from participant to audience member for a couple of others. And then there was the Hospitality Suite, wherein libations flowed as did the conversation. Cards Against Humanity came out at some point (Hi, Dave.) and I took the Friday night crown.

Naturally I’d signed up for a Saturday morning panel. But I’m a professional. And coffee is a magical elixir.

I went into the picturesque downtown of Lebanon for lunch. The spiced Belgian and the Double IPA were muddy. But that Thai sour, though looking like curdled milk, was fantastic. And the Ransack the Universe IPA was solid. Downtown Lebanon also has a used bookstore. I’m trying to go home with fewer books than I arrived with, but it is almost physically painful for me to walk by a used bookstore without going in. 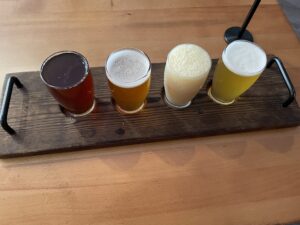 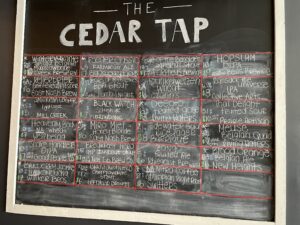 Saturday followed roughly the same pattern as Friday. Which brings me back to the nearly empty cup of coffee. The sacrifice of the beans is duly appreciated.

My flight home is late tomorrow afternoon. I hope to explore a bit more of Nashville before then.

If you would like to explore my books, browse through these options.

The day after completing the above post I was able to wander through Nashville’s equivalent of Bourbon Street. It doesn’t look the same as New Orleans’ famous street in the French Quarter. Nor does it sound the same. Instead of passing by competing blues, jazz, zydeco, or rock as you cross each entryway, you pass by competing country & western. None of the bar fronts advertised two for one or three for one drinks. But the general atmosphere is similar. And there is a river nearby. I’d go back. 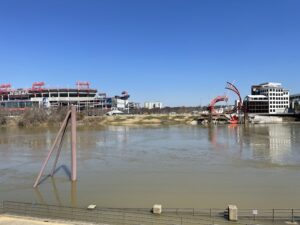 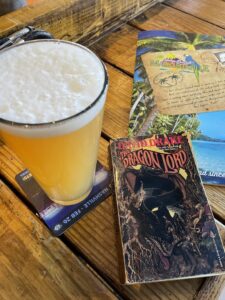