A Weekend at the Cabin Means a Snippet Day. 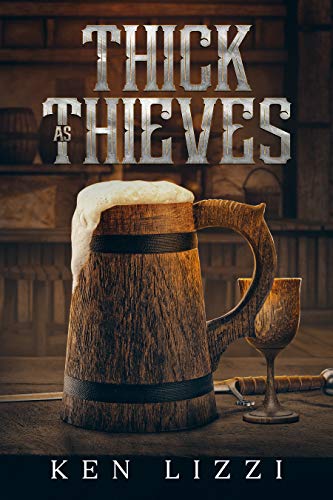 I spent the weekend at a forested cabin on a riverbank. A cabin weekend means relaxation. I did get some work done on the third Karl Throson novel, but otherwise the time was dedicated to playing board and card games, reading, strolling about a bit, and relaxing. That means the Sunday afternoon at home is full of chores, limiting time to write a post. So, instead, here are some pictures and a bonus snippet from my hybrid Sword-and-Sorcery/crime novel Thick As Thieves. Enjoy.

Glum Arent greeted the sun climbing near to noon. He woke in his cubby hole of a room in the cloisters of the Fullers Brotherhood. The Brotherhood had begun as a monastic order devoted to solitary contemplation, so the structures within their walled grounds held numerous private cells, more than the Brothers knew what to do with after the sect’s conversion to a proselytizing faith premised upon achieving unity through shared meals. Fellowship through Feasting, the Brothers called it, and the members of the order now spent most of their time catering. That freed up a lot of space and the Fullers’ abbot allowed Glum a room in exchange for the odd bit of copying, mostly recipes.

Glum snagged a bread roll and a cold slice of ham from one of the refectory kitchens. Breakfast leftovers. Food never presented a problem in the cloisters of the Fullers Brotherhood. Meals weren’t part of his arrangement with the abbot, but no one seemed to mind if he helped himself to leftovers now and again.

He’d endured worse hangovers. Cutting out of Shib’s early and the long walk home seemed to have forestalled the more typical aftermath. The food and a pottery mug of cloister-brewed ale took the edge off. Glum felt ready to face the day.

He dug the purse from its concealment beneath his tunic, counted out the take from last night’s rounds. He’d done well. The tale of the Battle of Shib’s Tavern proved popular, Cester Bailick Faren’s personal involvement and evident culpability intrigued a few night owls.

Glum figured he’d wrung what he could from the raw information. He began compiling mental notes for a poetic depiction, an epic in verse commemorating the battle. Something to occupy his pen that evening at Shib’s tavern. Maybe talk Shib into sponsoring a recitation, or at least standing him a few free rounds for the publicity.

The letdown was his description of the necklace Trader Vawn wore, the Panaegic Periapt. His tale met mostly with inscrutable masks. Glum figured his auditors did not want to let on how intrigued they were. A few—young, low ranking priests of some of the charity oriented religions—had listened with skepticism or outright derision. Probably too junior to have heard rumors of the Periapt’s power. In all, disappointing.

Glum made his way out on to the street. The paving fronting the cloister of the Fullers consisted of worn cobbles decades past due for maintenance. Glum wasn’t sure what was more dangerous: the cobbles slick with rain or the ankle catching gaps where a potentially rain slick cobble ought to be. At least it was still dry out. The rains weren’t due for at least a month.

Priests’ Promenade bustled with midday worshippers and the usual assortment of ecclesiastics, proselytizers, beadles, and deacons. The Clackmat Confederacy could not boast the sheer number of gods the Leyvans possessed, but the Confederacy’s indigenous faiths, sects, cults, and nascent enthusiasms counted in the dozens, almost all of which claimed places of worship in Kalapo lining the Boulevard of the Heavens. In fact, the Leyvan pantheon itself had begun making recent inroads, the clergy of one of the myriad Leyvan gods taking possession of an abandoned shrine and beginning construction on a new temple. The colorful garb of the Leyvans added to the chaotic rainbow of surplices, robes, cassocks, and other religious attire livening up Priests’ Promenade.

Glum wormed into the crowd. It was about time to make his way to Shib’s Tavern, pick up a more substantial meal, maybe a spot of wine to help inspire his composition.

He saw a familiar figure approaching, tall but slightly stooped, with the eagerness of a bird dog on a scent. Harribol Gravin, Apostolic Truthseeker of the Verians. A decent sort, earnest. Glum could tolerate him. Harribol had once purchased an epigrammatic verse from him as well as the odd bit of gossip.

“Harribol,” Glum said, meeting the Truthseeker where the cobbles of the Fullers met the pitted limestone pavers of the Pontifical Henotics.

“Glum, have you heard the news?” Harribol Gravin grinned as he spoke, the expression incongruous on the man, his long face normally so earnestly serious. “Funny, me asking you if you’ve heard the news.”

“That is funny. Positively droll. What have you got, Harribol? I can’t pay you.”

“The Truth is a gift to all, Glum. I’ve told you that many times.”

“And since that would put me out of business, Harribol, I’ve ignored you many times.”

“Well, you won’t ignore this. The Panaegic Periapt is in Kalapo. One of the Sharks is wearing it. They say it allows safe communion with the very gods themselves. How’s that for an eye opener?”