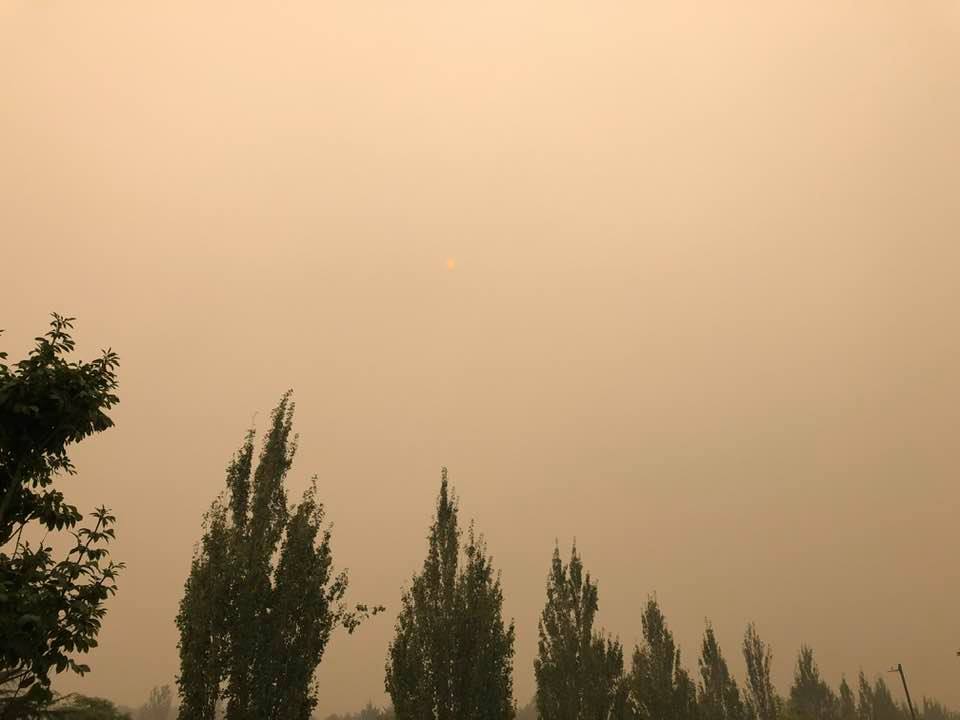 You may have noticed that the West Coast is on fire. I certainly have. My house has been blanketed by an apocalyptic miasma for days. At least the color has shifted, from a Martian orange, to powdered-urine yellow, to what it is now, a sort of dry white fog.

One of the major fires reached close enough that my small town was put on the second stage of alert, one short of “get the hell out now, we’re not going to save your ass.” MBW called me at the office on Thursday to inform me of the elevated threat status, so I came home early (earlier than I had anticipated, since I stopped off at the gym for a workout — fire be damned, I need my workout fix — only to discover that the wussies had closed for the day, despite being at the lowest threat level.)

It was odd seeing so much traffic heading inbound at that time of day. So many people had felt the need to evacuate. It certainly reinforced the reality of the situation, the danger so close to my backyard.

We packed up some essentials. Essentials. That simple word raises some interesting questions. The truth is, I wasn’t overly concerned. I doubted we’d need to scoot. But nonetheless I did think about it. The thought of my library burning is painful. I took a few videos about the house, anticipating a potential insurance claim and took a few moments appreciating things, objects I’ve acquired, collected, treasured. How important are they really?

I made some calls, checking on relatives, and securing a place to stay if it came to it. I made a couple of smoky excursions outside, chatting with neighbors. About half of them decided on pursuing the better part of valor. Not an encouraging realization. But no one I talked to sounded particularly worried.

Of course it was even less encouraging when we heard that the firefighters working the closest conflagration had thrown in the towel for the night, deciding there was nothing more they could do and they might as well get a good night’s sleep.

Not everyone slept well that night at the Lizzi house. The alert, moving up to level three, could come at any time. It did not, staying at level two throughout the day. I called in to the office. If circumstances changed, it wouldn’t be practical to drive all the way back home in order to help get MBW and the HA out the door. Best to stay home.

I still wasn’t particularly concerned, and grew even more confident as the day went on. I doubted the fire would jump the river, consume the evacuated small town the firefighters were trying to save, march toward me, cross a highway, and eat my house. It just seemed unlikely. And the weather cooled, the horrific winds that had fanned the blaze stopped, and the color of the enveloping pall of smoke paled to something that looked more familiar.

Yesterday, in the late afternoon or early evening, the level dropped back to level one. Everything still smells like smoke, and I expect it will for some time to come. But the house is still standing. And I had time for more writing, doubling my usual word count over the last couple of days. So, ill wind etc. I take my hat off to those fighting the blazes. Salute!

I hope the rest of you are getting through the latest catastrophe 2020 is serving up from the special Biblical menu. (I for one was looking forward to the plague of frogs. I bought additional hot sauce.)

If you’re looking for something distracting to read, you might find a book you’d like from this selection of my works.