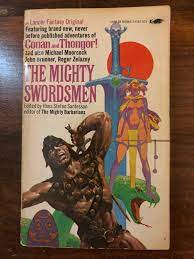 The Mighty Swordsmen comes close to delivering precisely as advertised, and even its single lapse is excellent. I admit to a lack of familiarity with the editor, Hans Stefan Santesson. He provided a short introduction, rambling about sorcery and what we’d probably now refer to as “deep time.” It doesn’t seem to have much to do with the stories inside, unless you want to find some reason to believe the events related might actually have happened. Nonetheless, Mr. Santesson shows a good eye for material.

Lin Carter leads off. I don’t know if Mr. Carter would be my lead off hitter, but he slaps at least a single, maybe a double with Keeper of the Emerald Flame, a Thongor the Mighty story. Carter’s prose in this one is (perhaps appropriately) as purple as the edge of the pages. But it is a solid S&S story. I didn’t count the words, but I imagine it weighs in at around novella length. Thongor is an adequate Conan clone, and you can probably shoehorn his era into Howard’s mythological timeline sometime pre-Kull. And Carter suggests even earlier human history, stretching back even earlier than Thongor’s Pleistocene, with the enormous ruined city/citadel, home to the mysterious villain of the tale. Nothing groundbreaking here, but I enjoyed it.

Roger Zelazny’s The Bells of Shoredan shows up again. Again? Perhaps. I previously reviewed it in my post on Warlocks and Warriors. Both that anthology and Mighty Swordsmen carry a copyright date of 1970. So I’m not sure which of these two saw print first. I’m not going to rehash my comments here. Same story; Dilvish the mighty swordsman the same as Dilvish the warlock and warrior.

Next up is rather a cuckoo in the nest. John Brunner’s Traveler in Black is a terrific character. All the stories of the mysterious immortal possessed of a single character are fantastic, highly recommended. Including the one in this anthology, Break the Door of Hell. But, in the interests of candor, the Traveler in Black is hardly a mighty swordsman. He’s not a swordsman at all. The staff he carries is not designed for combat, he engages in no quarterstaff play. This isn’t an action story at all. It is a philosophical piece, bitterly humorous, and critical of humanity. With his depiction of the worst of mankind through grimly clever anecdotes and his protagonists resigned, sadly jaded acceptance of it, Brunner achieves a certain faux-profundity that absolutely works. Brunner’s tales of the Traveler in Black belong alongside the works of Ambrose Bierce and Mark Twain at his most cynical. Excellent stuff, highly recommended. But, again, the story does rather clash with the rest of its anthology mates.

Björn Nyberg is next with a Conan pastiche. The People of the Summit can stand alongside the best of the de Camp and Carter additions to the Conan saga. That is either a criticism or a recommendation, depending on your stance on the old Lancer and Ace paperbacks and Messrs. de Camp and Carter’s contributions. I found Summit to be a solid entry, the story convincingly Conanesque and the prose reasonably Howardian. Conan behaved as I’d expect him to throughout. No complaints from this reader.

Next comes Michael Moorcock with The Flame Bringers, following chronologically Kings in Darkness which I covered in my review of The Spell of Seven. If you are an Elric fan, this one will probably resonate well with you, hitting most of the Elric high notes. To me it read rather like the outline of a novel. The events and characters rather crowd together, when it seems to me they should be given a bit more room for development. As it is, the story seems sketchy, attenuated. But it does move along, with enough connecting tissue to get the reader from scene to scene and all the necessary backstory and motivation included with the barest minimum of words. A fantasy version of the Mongol horde is threatening Elric’s adopted homeland and new wife, and has already destroyed Moonglum’s homeland. Elric is thus, with much soul searching and angst, forced to once again take up the Black Blade. It works. For my tastes, however, it is the weakest story of the anthology.

Last is Robert E. Howard with Beyond the Black River. That is how it is done. Where Moorcock is sketchy, Howard is detailed. The events in Black River could be condensed down to ten pages. But, while Howard keeps things moving, he allows time to paint the scene, to let the characters develop, and build the mood. I don’t know if Black River is the greatest Conan story, being more of an American frontier story retrofitted to work as S&S. But it is a master class in writing an adventure story. It is a fitting conclusion to The Mighty Swordsmen.

Mercenary segue: I’ve written about a few swordsmen myself. Falchion, of the Falchion’s Company novels, even named himself after a sword. I’m pleased to announce that thhttps://web.archive.org/web/20210123014724/https://www.amazon.com/Warlord-Falchions-Company-Book-3/dp/B08HZ9PBYH/ref=tmm_aud_swatch_0?_encoding=UTF8&qid=&sre third book of the series, Warlord, is now available in audio format, joining the first two, Boss and Captain. I still have codes for the US and UK. If you want to try out the series without shelling out a penny, drop me a line and ask for a code. Let me know which book, or books, you want to hear, and if you are in the United States or the United Kingdom. So long as I have codes left the offer is open. (Yes, I know, the artwork for Boss doesn’t match the other two. I updated it for the print and digital version, but not for audio. Mea culpa.)