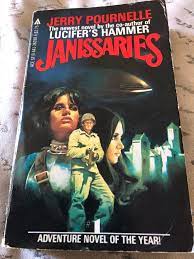 Jerry Pournelle’s Janissaries was first published in 1979. I was ten. My copy is the 1982 edition. So I probably first read this in ‘82 or ‘83 in my early teens. I’ve gone through it and the sequels a couple of times. Now I’m starting again, preparatory to reading the final, posthumous volume, Mamelukes (hoping a paperback edition will be available by the time I finish rereading the initial books.)

This time through I’m noting the time specific fingerprints carried in the book’s details, especially in the early chapters. Take the backstory, for example. We first meet Rick Galloway as a captain of a CIA backed mercenary outfit fighting Cubans in Africa. My guess is that Rick is Angola, and the Cubans are supporting the MPLA. This was a long running conflict, much of it fought between South Africans and Cubans in Angola. Sort of tertiary proxy conflicts of the Cold War, at least ideologically if not directly.

The book specifically calls out the H&K rifle. (The interior illustrations seem to suggest Ruger Mini-14s, but the text trumps the artist’s interpretation. The cover of my edition is even further off, giving the impression that Rick is a WWII soldier toting a Tommy Gun, or perhaps a Grease Gun, both .45 caliber submachine guns, not rifles.) Given the approximate time period, the rifles are probably Heckler & Koch G3s. I was surprised at first, reading this, since in my memory Rick’s men carried M-16s. While the error is understandable, given that the heroes are American, and it is natural to associate American soldiers of that period with the M-16A1 (this book set only a handful of years prior to the adoption of the A2), in fact the H&K makes better sense given the internal logic of the story: Rick is supposed to be a mercenary, not tied to the United States government. Having his troops carry American weaponry would be a mistake.

That said, Rick’s side arm is a 1911 style .45, specifically a Mark IV. The 1911 was the standard issue pistol for the US military up until the adoption of the Beretta nine-millimeter, the M9 (the pistol I occasionally toted during my fun and games in Haiti, American tax dollars at work), in 1985. I suppose the sidearm can be forgiven. A mercenary officer might legitimately carry whatever he felt most comfortable with for a personal weapon.

I’ll be curious to see if, in the subsequent volumes Mr. Pournelle remembered the period materials he provided his characters with, or if he slipped and wrote in the odd anachronism. I am enjoying the reread. Janissaries holds up on this, my third or fourth time through.