Swords Against Darkness: Here Be Monsters 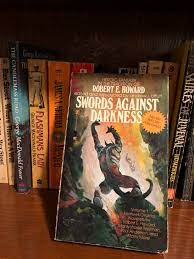 Monsters come in many guises. Andrew Offut put together an anthology illustrating that very point. It is a fine collection. It doesn’t achieve the heights of some of the other anthologies I’ve discussed in earlier posts, but it ain’t no slouch either. Most of the stories first saw print in this volume, so Offut could not simply cherry pick, stacking his roster with ringers, if I may crudely mash together metaphors. Given that (self-imposed?) handicap, he did an excellent job.

The first story deserves more praise and recognition. Andrew Offut provides a moving introduction, the details of which add emotional resonance to Nekht Semerkeht, perhaps the last story Robert E. Howard worked on before he punched his own ticket. Offut revised and completed the story, based on Howard’s plot. I think he pulled it off, maintaining REH’s style admirably. The tale, a bit of historical fantasy set in Texas during the later conquistador period, is deeply philosophical. Given the evidence of REH’s own feelings around this time, the narrative musing on the meaningless of life and existential despair, contrasted with the animal will to live, is moving. REH’s protagonist is a man who recognizes the pointlessness of his own existence and yet still, in his declining years, is driven by lust for gold and power. But he is overconfident, his belief in the superior technology of civilization in the end falls to ancient supernatural power in the form of the eponymous Nekht Semerkeht. Semerkeht is a monster indeed, a long-lived sorcerer who in turn can summon monsters even more ancient (presumably some form of pterodactyl.) This is in many ways a classic REH story, with plenty of rousing, engaging action, a femme fatale, and a potent adversary. If this was indeed REH’s last tale, it was a fitting one.

Poul Anderson offers up an example of the Northern Thing with the next story, The Tale of Hauk. He adopts a faux-Eddic style and carries it through beautifully. The story is dark and tragic, as one would expect. Anderson provides plenty of telling detail of Scandinavian life in the latter dark ages. And he gives a monster, an undead creature of unnatural strength, cursed and driven by ill-considered oaths. Such oaths play other parts in the story, again as one would expect. It is well crafted and memorable.

The Smile of Ossia by Geo. W. Proctor returns us to a more familiar writing style. And we get a more customary S&S hero, once he finally reaches the stage. Before that we get the first monster, in the guise of a beautiful green-eyed, redhead. A minor witch of some sort, apparently. Murderous and manipulative to boot. But that’s not the only danger our hero (heroes, since this is a buddy act, though only the lead is a POV character) faces. There’s a scheming priest who is rather monstrous in his own right. Not only that, we get an upgrade to Gods and Monsters, with a mercurial goddess of chance brought in for the final act. This is probably the weakest story of the lot. But it is entertaining and moves along at a reasonably good clip. I can’t complain. If it is good, it is good. There’s no need to denigrate it by comparison. (As a writer, I live in a particularly vitreous domicile. Chucking rocks would be foolish.)

Bruce Jones is next with the “one of these things is not like the other” contribution to the anthology. Pride of the Fleet is sort of an extended joke. It is a science fiction story that reads sort of like the script for a Heavy Metal comic book. Who knows, maybe there is some truth to that. Bruce Jones is a comic book artist, doing some Conan and Red Sonja work for Marvel in the mid 70s. Metal Hurlant started at the end of 1974, three years before this anthology was published. So, the timing makes it plausible. Pride of the Fleet is an amusing enough bit of fluff, and its references to Edgar Rice Burroughs are cute. There is, inevitably, a monster. Happy endings aren’t a given in Swords Against Darkness. But if the ending amuses the reader, all is well.

Manly Wade Wellman gives us an Atlantis story. Or, primarily, a post-Atlantis story. Straggler From Atlantis introduces us to Kardios, last survivor of (and partially responsible for) the drowning of Atlantis. Kardios is perhaps a rather trifling character, without much depth. But he is clever, quick, talented both musically and martially. The first monsters we encounter are benign. Giants, who we are meant to read as those referenced in Genesis as the Nephilim. These creatures rescue Kardios. They are beset by the actual monster of the story, who seems to be some sort of alien who has crash landed. The giants are unable to defeat the creature and have instead resorted to leaving sacrificial animals for it to consume. Kardios attends to his task through wit and speed. It is a good, lightweight story that in some ways reminds of L. Sprague de Camp’s work.

Next up is Richard L. Tierney with The Ring of Set. I wish there were more Simon Magus stories. Simon Magus is a jack-of-all adventuring trades. A fighter (former gladiator), wizard, and (through skills picked up as an escape artist) a thief. The first monster in this story is human, as shouldn’t come as a surprise by this point. We’re back to historical fantasy, so we get the Emperor Tiberius, in his final years of decadence. I thoroughly enjoyed that the ring of the story is an allusion to REH’s Hyborea mythology, calling out Thoth-Amon by name. There is also a biblical reference for the second story in a row, this one an allusion to the Egyptian sorcerers Moses squared off against, who could turn their staffs into snakes. The final monsters in this story rather aid Simon Magus, by chance and by skill. We get another Gods and Monsters moment, then Magus using his wizardly arts. Good stuff. Classic S&S.

I wrote about Ray Capella in my post on Warlocks and Warriors. Here he is again, though writing as Raul Garcia Capella. Whatever the name, he’s still the same writer, and still displays the same chops. Largarut’s Bane is the shortest of the stories herein. But not the least. It is a story that seems to contain more than a kernel of wisdom. While no sword appears, there is darkness. There is a monster to defeat, but how the hero defeats it is handled cleverly. Nicely done and just the right length.

We’re back to historical fantasy again with David Drake’s Dragon’s Teeth. Drake clearly knows his Roman history. His lead character, Vettius, is in the classic mold; brave, strong, experienced, and tough. But what I like most is that Drake stealthily provides another hero, an unlikely one given the genre. Very clever. The monsters in this tale are worthy antagonists, though they are not the ultimate antagonist. Drake plants historical and mythological references in this story that I enjoyed coming across. Hard to say, but this might be my favorite story in the collection.

Ramsey Campbell brings the volume to a close with The Sustenance of Hoak and the most unlikely monster of the lot. This is a story I admire more than I appreciate. It is well written. There are hints of backstory involving both the character and the secondary world that make me interested in reading more about both. But the story itself felt rather bland. My theory is that this is due to the setting rather than the story itself. The monster of the piece is fixed in the center of a dull, dying town surrounded by a wooden palisade and occupied by listless, apathetic townsmen (there is something of a drug addiction metaphor about the story.) The buildings are wooden shacks, slowly falling to decay and disrepair. There is no life to it. I think that if the story had been placed in a more exotic, colorful location, it would have held my interest more. I can’t help but compare it to Red Nails, though I admit that there is only minimal overlap. But in REH’s dying city there is color, radium gems, exotic structures. Sustenance feels rather turgid, even though — employing whatever quasi-objective tools I can to evaluate a story — it is a solid, clever story with decent action and characterization. I don’t know. Maybe it’s me.

Anyway, to sum up: Swords Against Darkness lives up to its name, with plenty of swords, plenty of darkness. And monsters.