What books made you who you are today? What is your personal Appendix N? [NB: Appendix N is a recommended reading list for players of Dungeons and Dragons, writers that influenced Gary Gygax in his approach to the game.] That is, what sources molded the mental clay into the person you became? I’ve been pondering that question. What is my aKendix N?

This is a different question than asking what authors influenced my writing. There will inevitably be some overlap, but they are two distinct subjects. For example, Elmore Leonard is a strong influence. And yet his novels did not in any appreciable way affect my outlook, interests, or character. So far as I know. Bear in mind also that this is a rather superficial look. This is my web log, after all; not known for its depths of analysis. Don’t look for any scholarly excavations. I’m not going to examine what the Founding Fathers read, though unquestionably what they read influenced the composition of the United States and, Q.E.D., strongly affected me in all facets. No, this will exploration will barely ruffle the surface. Just because I don’t list one of your favorite authors doesn’t mean I’m dismissing him. He may well be a particular favorite of mine as well. But this isn’t a list of favorites any more than it is a list of those who influenced my scribblings.

Stick around after for Savage Journal Entry 20. But first, marketing. Buy my stuff. How about Thick As Thieves? That’s a good one. Anyways, on to the non-alphabetic list. 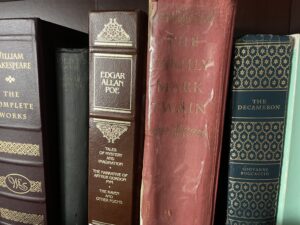 Mark Twain. A Connecticut Yankee in King Arthur’s Court, et. al. Twain is a seminal influence. I can barely remember far enough back to a time when I wasn’t reading Twain. I absorbed our enormous The Family Mark Twain. Some may wonder why I chose Twain. Isn’t he merely (merely?) the guy who Tom Sawyer and Huck Finn? What about all that science fiction and fantasy stuff? Isn’t that the sort of material that molded you? To which I reply with a derisive snort. Come on, no one is that superficial or one dimensional. Twain put his stamp of Americana deeply in my psyche. Riverboats, adventures in the West, unscrupulous politicians, etc. On the other hand, Twain also wrote A Connecticut Yankee in King Arthur’s Court, Captain Stormfield’s Visit to Heaven, and The Mysterious Stranger. He more than dabbled in speculative fiction.

Robert Louis Stevenson. The Black Arrow, Treasure Island, Kidnapped. Oddly enough, I didn’t read Jekyll and Hyde until my thirties. But boys adventure formed a large part of my reading diet. One might also throw Walter Scott into this mix. 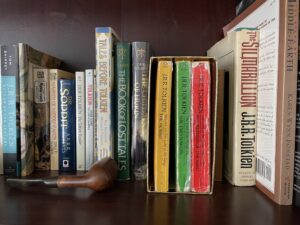 J.R.R. Tolkien. You know the drill. I first read The Fellowship of the Ring at age 11. I didn’t realize it was the first third of the overall work and began to worry (sometime after the fellowship left Lothlorien) that they’d never make it to Mount Doom in the few pages remaining. Countless re-reads have woven Tolkien’s vision into the fabric of my life. 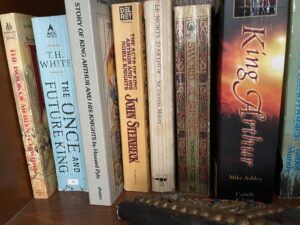 The Marys. Mary Renault, Mary Stewart, RoseMARY Sutcliff. The King Must Die, The Bull from the Sea, The Mask of Apollo, The Merlin Chronicles, Sword At Sunset. These women created and cemented my love of history, myth, and the juxtaposition thereof.

Howard Pyle. The Merry Adventures of Robin Hood. Before the Marys, there was Howard Pyle. Robin Hood was a gateway into all manner of interests and enthusiasms; history, legends, adventure stories, etc.

Alistair MacLean and Ian Fleming. The Guns of Navarone, Where Eagles Dare, et al.; James Bond series. These men provided the notion that adventure wasn’t limited to the historic (or semi-historic) past, but that recent events and (extrapolating from there) contemporary life are also valid arenas for adventure. Who knows what life might hold?

Robert A. Heinlein. Do I need to enumerate these? Heinlein made me think. 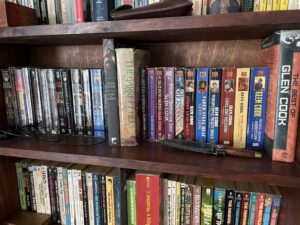 Glen Cook. The Garrett Files. Glen Cook is an influence on my writing. But he’s on this list because of Garrett. Though rather later in my personal development, Garrett became a sort of imaginary life coach, a spirit guide, a louche role model. As a bonus, Garrett also offered access to some of the classic American hardboiled detectives that I hadn’t already read. (And Cook, along with Steven Brust and Roger Zelazny formed my personal triumvirate of first-person smart ass writers. That sort of mindset and internal monologue developed independently, but these guys sure reinforced it as I grew older.)

L. Sprague de Camp. Lest Darkness Fall, The Complete Enchanter (with Fletcher Pratt) et. al. de Camp’s detached, tongue-in-cheek approach to pretty much everything has indelibly ingrained itself in me. And that attitude often expresses itself at inappropriate times. 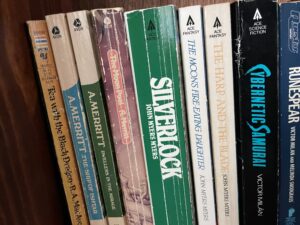 John Myers Myers. Silverlock. Myers annealed my abiding appreciation for the commonwealth of letters. I’d not have followed so many rabbit holes of obscure literature were it not for him. And I think I’m the better for it.

Doubtless I’m missing some. I’m sure names will occur to me later, probably waking me up in the middle of the night. But I don’t think the above is a bad aKendix. Who comprises your Appendix N?

Tonight dear diary, I would like to discuss pain. Pain is the constant attendant of the itinerant savage warrior. The endless leagues walked, the innumerable battles fought, the cliffs scaled by fingertips all lead to a life acted out against a backdrop of continuous, persistent ache. Or (to further abuse the theatric metaphor) pain – whether a dull tremolo, a throbbing beat, or a shrieking crescendo – provides the thematic music or leitmotif of the barbarian swordsman.

As an unalterable fact of life it is simply one more thing I must deal with. I accomplish this primarily by ignoring it. If I am not incapacitated or hindered by something then it is merely an inconvenience, like the weather. I can, for example, sleep in a blizzard without cloak or blanket. Just the same I can endure the stabbing pain of recently set broken fingers, snapped back into alignment and immobilized with rawhide cords. The body can handle it; it is the mind that must be mastered. The will of the barbarian is trained to this discipline from birth by that harshest of tutors, nature. (Nature generally gets an assist by barbarian parents who do not understand the concept of molly coddling.) Thus pain quickly becomes as accepted a fact of life as breathing. It is seldom something a barbarian gives thought to.

I gave some thought to it tonight as I removed an arrow from my thigh. The target of tonight’s attempted burglary had one more guard than my informant had indicated. I must remember to address that oversight with him soon.

Now, there are several ways to remove an arrow from the body, depending on location, depth of penetration, type of arrowhead, and other factors. One constant – they all hurt. This particular arrow possessed a broad, partially barbed head, and the shaft had been driven only about a quarter of the way through, missing any major arteries by a comfortable distance (using the term ‘comfortable’ loosely, given the circumstances.) The barbed head meant I couldn’t simply tug the arrow out without unnecessarily exacerbating the severity of the injury. The relatively slight penetration meant I couldn’t push the shaft through to the other side of my leg. No, in this case I must use my dagger to cut a channel either side of the arrowhead to ease its passage back out the way it had entered. So, I swallowed a mouthful of fiery, twice distilled red wine, poured a measure over the wound, and commenced to cut.

I worked through gritted teeth and did not give vent to the scream that seemed to well up from the wounded leg and jet directly to my throat. It wouldn’t do; someone might be listening and I have a reputation to maintain.

But it is safe to confide to you, dear diary, that tonight, I hurt.