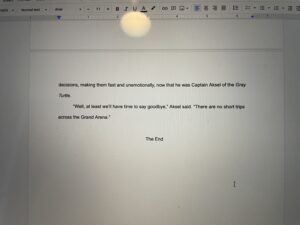 As a writer, you dream of reaching the conclusion. But we live in the present. Actually typing “The End” becomes anti-climactic rather than the cathartic experience you’d imagined. Still, it’s done. All those interminable hours in the chair have concluded with…something.

Is it any good? Here come the doubts, the second-guessing, the expressions of Imposter Syndrome, the questioning of life choices. All that time spent on this nascent literary abomination could have been better used for…some other purpose. Maybe.

Then you put the first draft away, stuff it in the back of a closet and try to forget about it for a month or so. Work on something else, so that when the time comes to begin the second draft, you are theoretically viewing the material with fresh eyes. Trepidatious eyes. Happily, it has been my experience more often than not that all the fear and self-doubt are misplaced. That what you expect to be risible garbage is actually not half-bad, in fact pretty damn good. All those essential components you think you neglected to include or minor bits of verisimilitude you came up with in the middle of the night a couple weeks after “The End” are actually already in there; your first draft self already thought of it.

So, we’ll see. Right now the first draft demons are advocating a steady regimen of despondency and suggesting I learn to code. Getting to work on the next project will send the little bastards scurrying. I’d best get to that.

But first, the next entry of Magnus Stoneslayer’s diary. And before that, I will propose that you buy something of mine that did turn out not half-bad, in fact pretty damn good. That’s for you to judge, of course. Here, take a look at a selection.

Right. Without further ado, here is:

If you encountered a sleeping bear in the woods what would you do, dear diary? Poke it with a stick? Throw rocks at it? Wave a hunk of venison under its nose? No, none of these. You’d move on and let it sleep.

I bring this up because in the course of stealing the ruby eye of Naga from deep within the bowels of the temple of Marduk I happened across the high priest and a couple of acolytes readying a sacrifice to some tentacled Horror from Beyond. A girl – stretched supine and fettered hand and foot – lay on a marble slab incised with weird glyphs. She wore naught but a gauzy wisp of skirt and brass breast cups. (Odd garment, that metal brassiere. Doesn’t look comfortable or supportive, and must be damnably cold first thing in the morning.) The acolytes were chanting and the high priest held aloft a curved dagger while he intoned a prayer to this obscene thing quivering in a pit gaping behind the altar. The being – god, devil, whatever –evoked in me a revulsion and primitive terror. It was in all ways alien.

Its sluggish movements hinted that it was as yet only semi-conscious, still awaiting the blood sacrifice to rouse it. (Where do these things get a taste for human blood? Are we considered delicacies at nightmarish cocktail parties in the far flung depths of space and time?)

Well, of course I mastered my dread of the supernatural, slew the acolytes and their boss, wrenched free the fetters with main strength, thus rescuing the girl from tentatively groping tentacles at the last second, and then (thighs bulging and sinews creaking) toppled the massive altar into the pit atop the loathsome monstrosity. All in a night’s work, really.

All well and good, but now I’ve got real problems. I have a terrified girl to see to. She’s only just stopped clinging to my neck and whimpering. Not that I minded: supple, rounded – though those infernal breast cups dug into my ribs. Enjoyable as this generally is, I’ve still got to deal with her. From what I’ve gathered between sobs she is a slave girl who’d dearly love to get back to her people. So I’ve that to sort out. But more immediately there’s this: I’ve slain the high priest of Marduk. I’ll have the rest of his clergy out for blood and I can’t be certain no one saw me.

No, I think it may be time to show Bandahar my heels. I’ll sleep on it, dear diary.