Appendix N and the Witchy World of Andre Norton 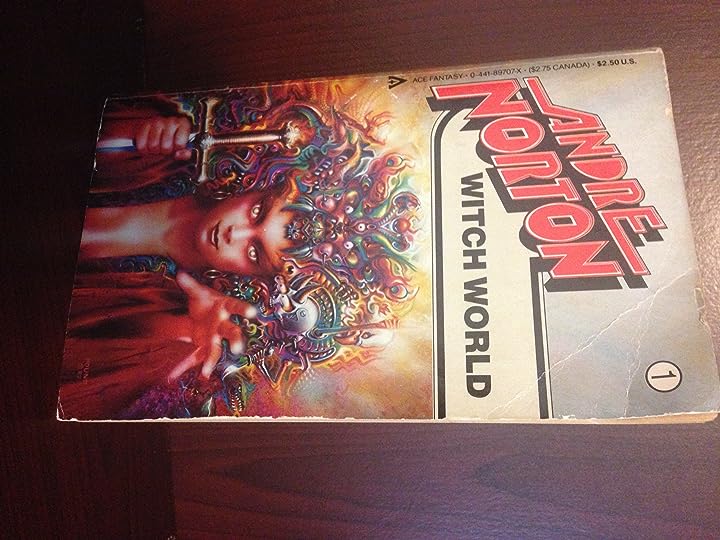 Well, as a cover it certainly is a…cover.

I come at last to Andre Norton, long a gap in my Appendix N reading. While she has always floated within my awareness as a reader, I remained unfamiliar with her works. I did pick up Quag Keep a few years back. My distaste for gaming fiction remains, but I think I can give Quag Keep a pass as it is evident that Andre Norton had only the most cursory knowledge of D&D and made little effort to stick within any established rules. The book is moderately entertaining if you’re not expecting much. That’s about all I can say for it. And I have read her story The Toads of Grimmerdale a couple of times and consider it an atmospheric delight. Recommended.

But Andre Norton is primarily known for her Witch World novels and those had eluded me. Oh, I knew of them. I recall picking some up many times from the library shelves, considering them, and replacing them. When I was in sixth grade, after school I would walk a couple of miles to the library to wait for my mother to pick me up at around six in the evening. Every day. For the entire school year. If a bibliophilic boy has a notion of bliss, this must meet it. I consumed that library. But not Witch World. For some reason the covers and descriptions always dissuaded me.

However, as I couldn’t get through this Appendix N project without exploring Witch World, I picked up a few of the books. Over a month ago. It has, frankly, been a slog. I don’t wish to be overly critical. Andre Norton was a successful, much admired, author. Perhaps it is age — my age, not the books. I think I might have enjoyed these when I was ten or so. I think today they might be marketed as Juveniles or Young Adult novels. There isn’t much there and what is there is relatively tame. She steered clear of detailed descriptions of violence. Romantic interests she dealt with in rather poetic terms and sex is merely hinted at.

As I read these I couldn’t help but wonder what another author might have done with the same basic plots and secondary world. Robert Adams, for example. I know, I know. You don’t have to rehash to objections, I understand them. But he was good with the visceral stuff and solid on weapons and armor, the latter subjects that Andre Norton dealt with imaginatively but not realistically.

It often struck me that Andre Norton was disinterested in the portion of the story she was telling at any one time. She’d elide and move on to something she was more interested in. She’d dispense with a concept, activity, dialogue, etc., within the space of a paragraph or even a sentence. Something that might easily of occupied an entire chapter gets summed up in a few words. You have to be careful reading her. Read too fast, skim, or even just blink, and you’ve missed an essential point. You have to backtrack to figure out why the characters are now here, or doing that. I think an English Literature major would charge her with favoring diegesis at the expense of mimesis. She’s more interested in forwarding the plot than in describing a situation. Sometimes the novels read more like an outline than an actual book. There’s clearly an interesting world being built, but she never made if feel real.

But I can see why Gary Gygax included her. It’s all there. Secondary world fantasy (technically, I think, Witch World is a portal fantasy) mixed with science fiction elements. The ubiquitous psychic powers of ‘60s and 70’s novels. (I find it tedious. And often smacking of deus ex machina. Abilities remembered, discovered, or forgotten as plot necessitates. Never rigorously explained and providing for pages of vague descriptions of what is obviously intended to be fraught and dramatic, but is instead unclear, rather boring, and taking place within someone’s head.) Magical swords. Loads of monsters and non-human races. Magical healing. Quests. Plenty of ideas to mine for role-playing adventures. So, kudos for that. But as novels? I can’t recommend them.

But do read The Toads of Grimmerdale. That’s a good one.