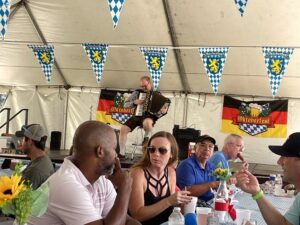 I took MBW and the HA to the local Oktoberfest celebration, hosted at a nearby golf course. It was rather smaller than I expected, especially given the deep German roots of Texas. But it was fun, with beer supplied by Texas Leaguer Brewing, the closest craft brewery to my new town. The HA had a marvelous time, running about on the grass with the other kids. I enjoyed the Knuckle Bock and the Mr. Oktoberfest Marzen. (Yes, I do drink something other than IPAs. On occasion.)

Oktoberfest is an odd festival for Americans to celebrate, if you think about it. If I recall correctly (and I’m sure there is more to it) a festival was held to commemorate the nuptials of Ludwig I to Princess Therese. (Digression: If you get a chance to visit Neuschwanstein, take it. The quintessential fairytale castle.) Why do we care about some Bavarian wedding from more than two centuries ago?

I’ve given that question some thought. America is, famously, a melting pot. Our ancestors brought their celebrations with them, or their descendants reached back across the waters and borders and dragged them here. Saint Patrick’s Day was not a big deal in Ireland. Cinco de Mayo is a regional celebration in Mexico, not a national holiday. But we happily adopted and integrated them, and Oktoberfest, into our calendar.

Which got me to thinking about what sort of fictional festivals we could do the same thing with. (Science fiction or fantasy, that is. This isn’t an appeal to federally recognize Festivus.) Some might say that’s been tried with May the Fourth. But I don’t think that’s expanded from a mere marketing ploy. I’d rather see Unification Day, September 20. Or March 25th, the Day of Sauron’s fall.

It won’t work, though. And I’ll tell you why: The holidays we’ve successfully adopted from the lands of our ancestors are fundamentally just excuses to drink. In order to migrate a fictional holiday to popularly recognized annual event demands some direct linkage to alcohol. I’m not sure Malcolm Reynold’s insinuating himself into an Alliance bar each year gets the job done. Any suggestions?

And now, for those of you still taking the journey, here is the next entry in Magnus Stoneslayer’s diary.

You shouldn’t underestimate the value of a good war cry, dear diary. Oh, sure it isn’t always required or even advisable. There are circumstances that demand fighting in silence, expressing cold, restrained fury. That can really get to some opponents; a slow terror builds in them as they face your implacable mask, the visage of an inhuman, unstoppable killing machine.

But at certain other times noise is absolutely essential. It can be as simple as a wordless bellow. This works well in surprise situations, freezes the startled enemy for a few vital seconds.

I’ve also used a few well-chosen phrases and epithets, yelled with stentorian conviction. One I won’t use again, dear diary, is “Baal’s sweaty balls.” Never again. I employed that unfortunate blasphemy this morning when a huge, shambling, hairy monstrosity – some semi-human evolutionary throwback, or dead-end genetic mistake – emerged from the trees and slung Yaslina (the young woman recently in my care, as you recall, dear diary) over one massive, sloping shoulder.

I tugged my broadsword free of the shagreen sheath and waded in, loosing the aforementioned war cry from deep in my steel muscled abdomen. Yaslina – in the grasp of some nightmare beast, mind you, and potentially headed for some grisly end – burst into laughter!

At me! So “Baal’s sweaty balls” is now consigned to the war cry dust bin.

I took the monster apart with a few well-placed strokes. Then I waited to respond with stony disinterest to Yaslina’s emotional outpouring of gratitude. But instead she just continued laughing. Peels of mirth, not hysteria. At my expense.

It may be time to take a break from wandering the wilderness. A vacation, if you will. It is something I shall take into consideration until next time, dear diary.