The Little Convention That Could

So that’s NanoCon Mk. V done. What is NanoCon? It is a science fiction convention hosted by the science fiction club of Lower Columbia College in Longview Washington, a port town on the Columbia River about an hour from the Pacific. It isn’t big. I doubt two hundred people attended. Hence, I presume, “Nano.”

Still, as Gandalf probably reassured himself, size isn’t everything.

I sat on two panels, one of which I believe I was moderating, though that was never clear. Both went well, despite my presence. I would attribute the entertainment and informational value of both to the contributions of Greg Bear. The noted author is a wealth of knowledge and anecdote. If we are playing the “degrees of separation game” I am now much closer to winning, is what I’m saying.

In fact I had the honor of being invited by Astrid and Greg Bear to have dinner with them. That was a pleasure. When your life has been spent saturating in the works of Golden Age speculative fiction writers, hearing stories of them by a close friend (and/or relative) is manna.

If you’ll recall from my last post, I recently returned from Arizona. One of the spots I visited was Lowell Observatory, in Flagstaff. That place held a fascination for me because Percival Lowell’s observations of the channels of Mars (and enthusiastic misinterpretation thereof) helped inspire Edgar Rice Burroughs’ Barsoombooks. And those books inspired my Under Strange Suns. Well, Lowell Observatory also employed Clyde Tombaugh, the discoverer of Pluto. To bring this full circle, Mr. Bear once met Clyde Tombaugh. Thus adding one more tenuous link to my insubstantial chain. Because it’s all about me. Right?

No, it is also about beer. A friend of mine (“Hi, Jack”) drove out to the con. We enjoyed a lunch of peanuts and beer tasters at Five Dons Brewing. A tiny place, nearly around the corner from the Ashtown Brewing, the place I visited last year. How convenient. 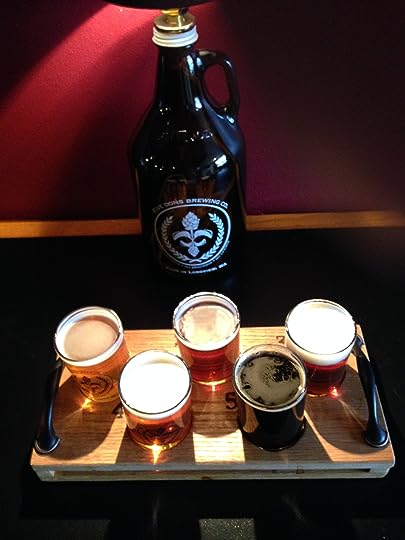 Now, time to trek back to Sandy. I’ve neglected MBW and the HA long enough.